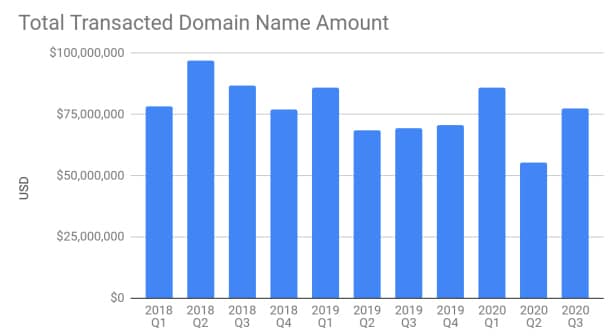 The domain name aftermarket rebounded in the third quarter of 2020 after a dismal second quarter.

While many companies handle payments for aftermarket domain names, Escrow.com is seen as a bellwether for the market because it handles many private sales. It’s also the only large company that reports aggregate sales data each quarter.

Escrow.com blamed the Q2 drop on the pandemic and businesses holding off on closing deals.

The median price for domain name transactions in the quarter was $2,750, and the median for websites was $5,000.

How Dan.com is building a tech and payments stack for domain name sales.

I’ve always thought of Dan.com as another domain landing page sales platform. But I walked away from my conversation this week with founder Reza Sardeha with a new way to describe it: Dan.com is a technology and payments stack for domain sales. You’ll understand what I mean after listing to this week’s newsletter.

A lot is going on under the hood with Squadhelp’s new marketplace option.

Squadhelp’s white label domain marketplace option is about more than creating a marketplace.

I wasn’t excited when I first read about this. There are several options out there for creating a marketplace for your domains. I’ve never been a fan of this because I find it unlikely that someone will land on your marketplace, search for a domain, and buy it.

But Squadhelp buries the lede with its announcement. What the white label marketplace really lets you do is set up great landing pages for your domains with added features and low commissions.

When you add domains to your white label marketplace through Squadhelp, you get:

I talked about this new platform and how domainers can use Squadhelp’s tools with Squadhelp CEO Darpan Munjal on this week’s DNW Podcast.

You can see the marketplace I set up here.

.Ai has a new record-holder.

.Ai is the country code domain name for Anguilla but has been adopted for use by many artificial intelligence companies.

This domain sold for a lot and it certainly has valuable uses.

George Kirikos frequently demonstrates his great skills in finding valuable information about domains. Recently, he dug up some old stuff to reveal the price of the domain 56.com.

In a post he wrote on the Namepros domain forum, he discovered that the owner wrote down $7.2 million in value of the domain, meaning it paid at least $7.2 million to buy the domain in 2014. This is spectacular when you compare, for example, that 37.com sold for only $1.96 million in the same year.

56.com has an interesting history in terms of its business side. It was registered in 1998 and then developed into a free email service called Le You (乐邮) in 2005. The number 56, however, only partially matches the brand — where 6 rhymes with Le.

Later that year, 56.com was turned into a video site called Wo Le (我乐=I have fun). Here, the domain is fully brand-matching, with 56 rhyming with Wo Le. It was a big hit, becoming the largest video-sharing site in China.

Then, the business was sold to Renren for $80 million in 2011, and then to Sohu for $25 million in 2014 when Renren ran into some financial difficulty. Sohu removed the “Wo Le” brand and started using purely the number 56.

From the history of 56.com, you can see that the domain is very versatile. It was used in the entertainment industry, and it was given a Chinese meaning at one time but the meaning was dropped later without any problem.

In fact, the domain is also great for the logistics industry because 56 rhymes with Wu Liu (物流=logistics). This is even more significant when you consider that China is the largest logistics market in the world. Many logistics companies are already using 56 in their domain names. (See my article “The number 56 has a special place in domains“.)

Number-number domains are powerful because they are short enough to be easily remembered. In China, you also have the option of either using the number only or giving it a meaning, as demonstrated in the history of 56.com.