Non-profit said it acquired HonestHistory.com for an online archive of historical artifacts. 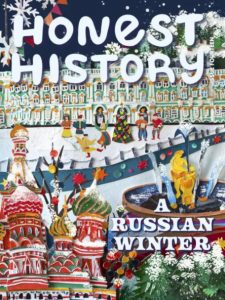 The publisher of Honest History magazine lost a cybersquatting challenge against HonestHistory.com.

Mercury One, a non-profit founded by conservative media personality Glenn Beck, has successfully defended the domain name HonestHistory.com in a UDRP.

Mercury One acquired HonestHistory.com from HugeDomains for $2,595 in May 2019. The Complainant had published a few quarterly issues by then, but it appears the Mercury One wasn’t aware of that. Mercury One hired consultants to help name an online archival database of thousands of historical artifacts and documents, and the consultants suggested the name Honest History.

World Intellectual Property Organization panelist Scott Blackmer found that Honest History Co did not show that Mercury One lacked rights or legitimate interests in the domain:

It’s surprising that Honest History Co didn’t buy HonestHistory.com when it could have, given the low cost.

This isn’t the first time Glenn Beck has been connected to a UDRP. In 2009, he lost a UDRP against the domain glennbeckrapedandmurderedayounggirlin1990.com.

What happened in November in the domain business.

These were the top stories on Domain Name Wire last month, ranked by views.

1. Here are the metaverse-related domains Meta (Facebook) has registered – It turns out it registered a lot more with privacy through its registrar. It also bought one at Sedo.

3. Bird.com domain name sells – A domain that sold (but didn’t) in an auction this year has now really sold.

4.Company that paid $3.5 million for IT.com is selling subdomains – Where have we seen this business model before? And how did it turn out? 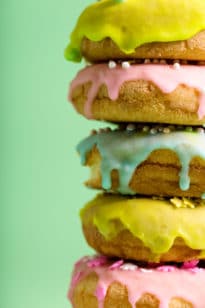 I can’t wait to eat Donuts in the metaverse.

Donuts has published its monthly domain trends report for November, and it shows that meta has been unseated as the hottest keyword in the company’s domains. It has been replaced by verse, which would be the second part of metaverse. So it’s still all about the metaverse.

In the entire namespace, meta still seems to be outpacing verse by about a 2-to-1 margin, according to Estibot data.

Donuts also published its top 20 premium domain sales of the month.  Rd.group and ae.group led the charts. These domains have a wholesale price of about $2,500 per year. Another interesting sale was btc.market. While the wholesale price was around $800, the buyer paid an additional $6,605 to win this domain in a Sav.com expired domain auction.

Feature makes it easier to find good domains that are about to be sold. 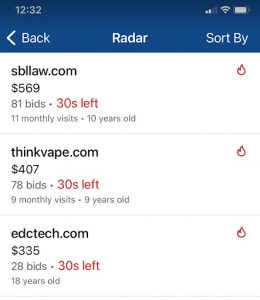 The Radar feature will be available for all app users next week.

Next week, GoDaddy will roll out its new Radar feature to all Investor app users.

Radar is essentially a last-minute board for GoDaddy Auctions. The feature shows all GoDaddy auctions with at least one bid that end in the next four hours. It can be sorted by time, bids, age, traffic, and price. Auctions with two or more bids have a fire symbol.

While you can see last-minute auctions on the GoDaddy Auctions website, the user interface and on-the-go capabilities make Radar more useful. I found myself bidding on multiple last-minute auctions this week while I had spare time, such as waiting in the car to pick my kid up. If enough people use Radar, it will make it harder to buy good domains without facing competing bidders.

To access Radar, look for the Radar icon in the upper left-hand corner of the Investor app’s dashboard.

End users are buying .xyz domains. How did we get here, and what happens in the future?

Marketing planted the seeds for today’s interest in .xyz.

Yesterday, Square announced it was rebranding its corporate umbrella to Block and chose the domain block.xyz for its website. Block also uses spiral.xyz for one of its operating businesses.

If you’re suddenly surprised that companies are using .xyz domains, you haven’t been paying attention this year.

Domain investor Swetha Yenugula has been selling .xyz domains like hotcakes all year. You know the first reaction I got when I started posting her sales? Publicly and privately, people called B.S. How was this person selling all of these .xyz domains for four and five figures? Hats off to Swetha for having conviction and investing a lot of money before .xyz became what it is becoming today.

On the surface, .xyz isn’t that great of a domain. Sure, it looks edgy. Being the last three letters of the alphabet is interesting but has limited use cases (see Google rebranding to Alphabet). It’s also a long domain (when spoken) at three syllables. And Z is pronounced differently in lots of English-speaking countries. Many people snickered when Daniel Negari decided to go all-in on this extension.

The team at XYZ set the stage for this, though. I don’t like all of its marketing activities….the domain stuffing and cheap domain sales to look very successful before it was, for example.

But if you look closer, XYZ has been doing a lot of smart things. It got influencers to switch to .xyz. It spent a lot of time highlighting companies and people using .xyz. It marketed at tech events like SXSW.

Ultimately, the community decides which TLDs are successful. The people who pick domains for their websites decide this. And like .io, a lot of people have decided .xyz is a good choice. XYZ planted the seeds and some of those sprouted. Once they sprout, the new seeds blow around and spread.

Blockchain companies seem to be particularly interested in these domains, and blockchain is having another moment.

Now, there’s a lot of risk to investing in .xyz domains. Who knows where this will all be in a few years. I guess if you believe in blockchain, you should believe in the momentum here. If you think that’s all going to crash, you have to ask yourself if other companies will pick up the mantle. (And I don’t mean to suggest that it’s only blockchain companies using .xyz; it just seems to be driving momentum this year.)

The .xyz surge seems to be built on more than what we saw from .club at the beginning of the year. That was built on the hype for one new platform, Clubhouse. It was also stoked by people trying to sell newbie domain investors on an expensive course. That platform ended up nosediving and those course sellers don’t have a course to sell anymore.

Investing in new top level domains comes with risks, just like all investing. You have to ask yourself if current .xyz prices give you the opportunity for a return. You have to ask yourself if prices will keep increasing. At Sav.com auctions, unknown.xyz is $2,750 and favorite.xyz is $1210 right now, and will surely sell for more when they close. Will these look like bargains years from now, like old .io sales seem now? I don’t know.

This is a lot of fun to watch.