ICANN survey shows that acceptance of domain name extension options is higher outside of the U.S. and Europe.

ICANN has released results of the first phase of a multi-year consumer study on the domain name landscape.

The survey of over 6,000 people who use the internet 5+ hours a week was conducted in February. Here are some of the notable findings around awareness and trust of top level domain names.

Unsurprisingly, awareness in legacy domain names such as .com is much higher than new TLDs.

.Com dominated across all five regions — North America, South America, Europe, Africa and Asia. At least 88% of survey-takers were aware of .com. .Net and .org were also strong.

Other legacy TLDs, such as .info and .biz, had 18% to 50% awareness depending on the country. .Mobi, .Pro, .Tel, .Asia and .Coop had single digit awareness for the most part. (An outlier was .mobi in Africa, which has 40% awareness.) 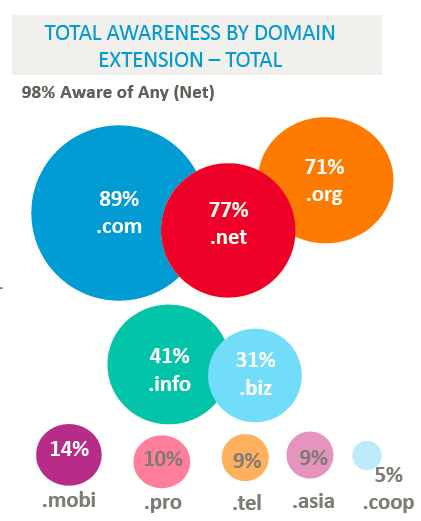 When it comes to which legacy TLD someone would choose for setting up their own website in the next 6 months, .com also dominates.

Awareness of any of the new TLDs from a list of top sellers such as .email and .link was much lower. But here, an interesting trend emerges.

Only 29% of North Americans and 33% of Europeans were aware of any of the new TLDs they were shown. But 48% to 54% of people in South American, Africa and Asia were aware. This suggests those markets should be prime targets for new TLD registries.

The awareness and visitation stats on new TLDs get a little wonky, though. More people reported awareness of .email domain names than the other top domains. And of those that said they were aware of at least one new TLDs, 38% said they visited a .email website. This sounds odd, as .email isn’t really a site you’d think to visit as opposed to use in an email. It’s even more perplexing when people were asked which new TLDs they would consider to set up a website. .Email came in top at 50%, despite its specific nature.

The survey found that domains with an implied purpose and functional associations, such as .EMAIL, were most often recalled by Internet users. While some of the drivers may be linked to familiarity and general association versus awareness of the extension, we believe it’s a signal that people are receptive to the names.

I’d be very interested in free form response data about awareness of new top level domain names. For example, a question that asks people to list domain name extensions they’re familiar with, rather that showing an extension and asking if they are familiar.

People tend to trust things they’re familiar with, and domain names are no different. When shown individual legacy domain name extensions, they had an average “trustworthy” response of 90%. The number was even higher for targeted country code domain names at 94%.

When shown new TLDs, the numbers were much lower. The average trust in new extensions was 49%.

The survey only showed the top TLDs in terms of registrations as of the beginning of this year. There was quite a bit of difference in trust for each extensions.

.Email was the most trusted (non-geographic) new TLD at 63%. .XYZ and .guru had the least trust at 35% and 42% respectively. I find .email’s trust ratings interesting, as there are no restrictions on their registration.

You can view full results from the survey on ICANN’s website.