MMX is one bright spot in the industry.

Major domain name stocks are treading water this year despite the up markets.

I analyzed prices from the December 31 close last year to the market close yesterday, June 9. During that period, the Dow is up 13%, the S&P is up 12% and the NASDAQ is up 8%.

MMX is up due to the GoDaddy acquisition, but other stocks are either neutral or down. Here’s a look, ranked by gains for the year.

MMX (London AIM: MMX): Minds + Machines (MMX) is the one bright spot this year after GoDaddy announced it’s acquiring substantially all of its assets. Shares are up 46%.

Tucows (NASDAQ: TCX): Shares in the company that owns Enom have increased 5% so far this year. Its yearly financial comparisons are hard to read because the company sold its mobile business last year on an earn-out deal.

Verisign (NASDAQ: VRSN): Verisign is trading neutral for the year, up 1%. It surprised the market with improved guidance after Q1. Analysts and stockholders should have already priced in the 7% price increase for .com that goes into effect on September 1.

GoDaddy (NYSE: GDDY): GoDaddy is treading water this year, down 2%.

Clarivate (NYSE: CCC): Clarivate is kind of, sort of a domain company. It owns MarkMonitor. It was a SPAC before SPACs were cool. Shares are down 11% so far this year.

CentralNic (London AIM: CNIC): CentralNic’s shares are down 12% so far this year. The company reports strong growth as the mix of the company has changed with a focus on online advertising businesses.

NameSilo (OTC: URLOF): NameSilo is down 22% this year. The company announced last year that it signed a non-binding letter of intent to be acquired, but that has not progressed to a definitive agreement as of April 5 this year.

I do not own individual shares in publicly-traded domain name companies to avoid a conflict of interest. Mutual funds I own, including index funds, do hold some of these stocks.

Panel determines that ICANN violated its bylaws by failing to make a decision about Verisign’s deal for .web.

“…[ICANN] has violated its commitment to make decisions by applying documented policies objectively and fairly.”

This is the big takeaway from an Independent Review Panel (IRP) decision regarding a long-running dispute over the .web top level domain name. ICANN consistently avoids making decisions to the detriment of its contracted parties and the internet community, and the battle over .web is a prime example.

Now, it’s being asked to show up and make a decision.

The dispute stems from the auction for the rights to the .web top level domain name.

Nu Dot Co, a business founded by .Co Internet’s founders, applied for the .web top level domain. After the application period closed, Verisign (NASDAQ: VRSN) decided it wanted to own .web and worked out a deal with Nu Dot Co in which Nu Dot Co would bid in the auction and Verisign would then buy the top level domain from it.

Nu Dot Co (NDC) won the auction for $135 million, which was the amount of the second-highest bid, placed by applicant Afilias.

Other applicants were upset. Not only did their rival Verisign win the auction, but Nu Dot Co decided to use an ICANN auction of last resort rather than a private auction in which the losing applicants stood to earn tens of millions of dollars each.

Donuts, another applicant, subsequently sued, but the judge dismissed the case.

After Donuts exhausted its options, Afilias picked up the baton and filed for cooperative engagement with ICANN. Then it escalated to the Independent Review Process.

…by failing to make a decision.

It may be fair to say, as averred in the [ICANN’s] Response, that “ICANN has been caught in the middle of this dispute between powerful and well-funded businesses”. However, in the Panel’s view, it is not open to [ICANN] to add, as it does in the same sentence of its Response, “[and ICANN] has not taken sides”, as if [ICANN] had no responsibility in bringing about a resolution of the dispute by itself taking a position as to the propriety of NDC’s arrangements with Verisign.

In the opinion of the Panel, there is an inherent contradiction between proceeding with the delegation of .WEB to NDC, as [ICANN] was prepared to do in June 2018, and recognizing that issues raised in connection with NDC’s arrangements with Verisign are serious, deserving of [ICANN] consideration, and remain to be addressed by [ICANN] and its Board, as was determined by the Board in November 2016. A necessary implication of [ICANN’s] decision to proceed with the delegation of .WEB to NDC in June 2018 was some implicit finding that NDC was not in breach of the New gTLD Program Rules and, by way of consequence, the implicit rejection of the [Afilias’] allegations of non-compliance with the Guidebook and Auction Rules. This is difficult to reconcile with the submission that “ICANN has taken no position on whether NDC violated the Guidebook”.

Essentially, ICANN should have made a decision on whether the deal between Nu Dot Co and Verisign complied with the New gTLD Program Rules or not. Instead, it seems to have hoped that either the competing bidders would drop the matter or some outside group would make this decision for it.

The IRP determined that it did not have authority to decide that Afilias, the runner-up in the auction, should get the domain. It merely decided that ICANN has to do its duty: make a decision! At the same time, the IRP ordered ICANN to pay the majority of Afilias’ expenses and fees for the IRP.

So what does ICANN have to say about this? It still hopes to avoid making a decision. In a post on its website, it states:

The ICANN Board will consider the Final Declaration as soon as feasible, within the timeframe prescribed in the Bylaws, and remains hopeful that the relevant .WEB applicants will continue to seek alternatives to resolve the dispute between them raised during the IRP. (emphasis added)

Verisign issued a statement today urging ICANN’s board to proceed with contracting the domain.

The domain market is sizzling as more companies go online.

A chart from Verisign’s earnings presentation showing steady growth in the base of .com and .net domains, with an uplift in Q1 2021.

The registry processed 11.6 million new .com and .net domain name registrations in Q1. That added 2.8 million domains to its base after accounting for deletions. As of today, there are 155.1 million registered .com domains and 13.5 million .net

For comparison, Verisign processed 10.0 million domain registrations in the first quarter of 2020.

The company credits a growing economy for the uplift. Domain registrars tell it that growth is broad and is driven by small businesses and individuals.

Its earnings will be helped by a 7% increase in the price it charges for .com registrations and renewals starting September 1.

The company also announced that it expects an Independent Review Panel to issue a ruling on .web within 60 days from April 7. Verisign won the auction for the domain but runner-up bidder Afilias disputed the auction because Verisign bid through a different entity.

Verisign reports another steady year at the helm of the .com registry.

The company’s operating margin was 63.9% in Q4, the same as it was the year before.

The net base of .com and .net domains increased 1.46 million during Q4 after considering 10.5 million new registrations minus deletions.

Verisign also announced it is increasing the wholesale cost of .com domains by 54 cents on September 1. This increase will fall directly to the bottom line.

Domain investor costs are about to increase. 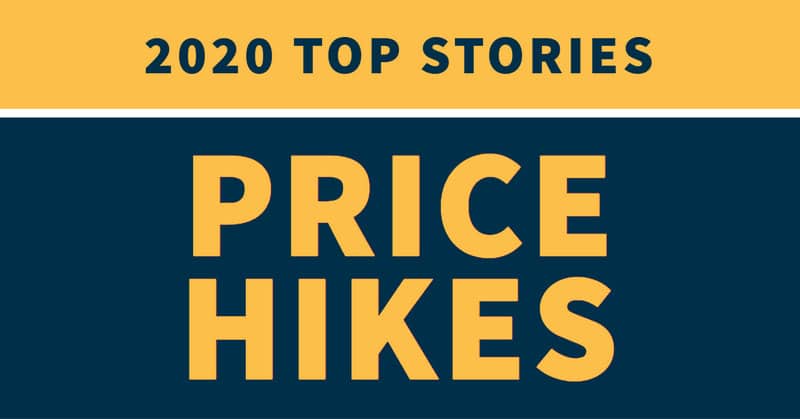 This is the fifth in a series of posts about the domain name industry in 2020. Read the others here.

.Com prices are going up.

ICANN agreed to a contract extension with Verisign (NASDAQ: VRSN) in 2020. The extension allows Verisign to increase the wholesale price of .com domains by 7% per year in the last four years of each six-year contract extension. The first year for potential price increases began in October.

Verisign has postponed rate hikes during the pandemic but says it plans to enact the first price increase by October 2021.

7% might not seem like much, but it adds up. The owner of 1,000 domain names can expect to pay about $2,400 per year in additional renewal fees by the fourth increase.

And to Verisign, it’s a lot of money. There are 151.75 million .com domains registered. Upon renewal, the first 7% increase adds over $80 million of pure profit to Verisign’s bottom line.

(Domain owners will likely face price hikes in other extensions, too. ICANN lifted all price restrictions on most top level domains in 2019, including .org, .info, and .biz.)

And thus continues the love/hate relationship between domain investors and Verisign. Domain investors spend time propping up the value of .com on domain blogs and in forums, all the while fighting against price increases.

Just a handful of years ago, Verisign wined and dined domain investors. Then it threw them under the bus.

But Verisign has also taken steps to try to placate registrars and big investors this year. This year, it ran marketing promotions that discounted the price of .com domains that were just dropped, padding the profit of drop catchers.

One thing is certain: expect Verisign to take full advantage of the price hikes it has been afforded. And that means rising costs for domain name owners.