Here’s a look back at what happened in the domain industry last month.

These are the top five stories ranked by views:

2. Unstoppable domains files trademark applications for .NFT, .Doge and others – Alt-root, blockchain-based domains company filed for a lot of trademarks and then announced it was launching 8 new top level domains.

3. GoDaddy sales data dump: sales up to $390k plus a big .org sale – GoDaddy revealed 20 of its top sales from January of this year, including one of the biggest .org sales of all time.

5. Company files UDRP against deceased man, and I have questions – A company in Denmark filed a UDRP against a man it likely knew was dead.

And here are the podcasts (in reverse chronological order) in case you missed any:

#343 – Growing Voices.com with a killer domain with David Caccarelli – listen

Someone paid a lot of money for an NFT commemorating the creation of the world wide web. 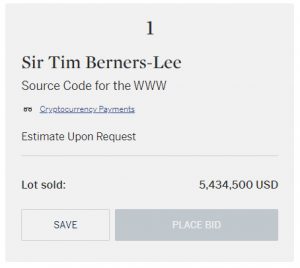 A buyer has paid $5,434,500 for a non-fungible token (NFT) commemorating the creation of the world wide web.

Auction house Sotheby’s auctioned the NFT by Sir Tim Berners-Lee, creator of the world wide web. It included four “mementos,” including a copy of the source code, a video file simulating writing the code, an SVG file of the code, and a digital letter written by Berners-Lee. All of these items are still available for your enjoyment on Sotheby’s website if you weren’t the lucky bidder.

The final price either includes the buyer’s premium, or the bidding skyrocketed in the final second. With just seconds to go, the auction stood at $4.5 million. Upon conclusion, it stated that the final price was $5,434,500.

Creator of the world wide web is auctioning an NFT at Sotheby’s.

An animated visualization of the world wide web source code being written is part of an NFT for sale at Sotheby’s. Partial screen capture from Sothebys.com.

You can create an NFT (non-fungible token) for just about anything, and world wide web creator Tim Berners-Lee is getting in on the action.

Berners-Lee is selling an NFT through Sotheby’s called Source Code for the WWW. Bidding has reached $1.1 million with 7 days remaining.

The lot description on Sotheby’s reads:

1. Original archive of dated and time-stamped files containing the source code, written between 3 October 1990 and 24 August 1991. These files contain code with approximately 9,555 lines, the contents of which include implementations of the three languages and protocols invented by Sir Tim; HTML (Hypertext Markup Language); HTTP (Hyper Transfer Protocol); and URIs (Uniform Resource Identifiers), as well as the original HTML documents that instructed early web users on how to use the application

3. A Scalable Vector Graphics (SVG) representation of the full code (A0 841mm wide by 1189 mm high), created by Sir Tim from the original files using Python, with a graphic representation of his physical signature at lower right

4. A letter written in the README.md file (in “markdown” format) by Sir Tim in June of 2021, reflecting upon the code and his process of creating it

To be clear, the auction is for a copy of these items minted as an NFT.

73 bids have been placed so far. The buyer can settle in U.S. dollars or cryptocurrency.

Data show that people are registering lots of domains related to non-fungible tokens. 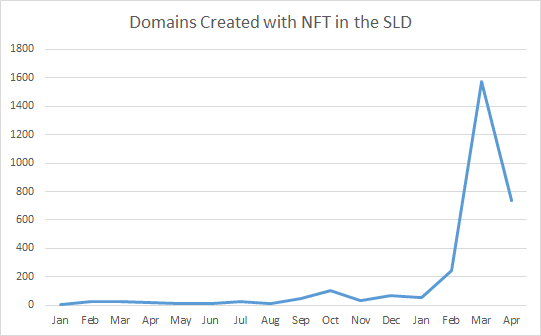 Donuts has seen a spike in domain registrations including the initialism NFT.

Non-fungible tokens (NFT) are hot right now. NBA Top Shots have introduced mainstream collectors to NFTs, and stories about digital art NFTs selling for hundreds of thousands (or millions) are making the rounds.

The nice thing about new terms entering the lexicon is that all of the good domains weren’t registered in the 1990s. After all, the term didn’t exist back then. So valuable domains have been hand registered in the past couple of years, and there might still be opportunities to register NFT domains with value.

Top level domain company Donuts releases a monthly market report with trending keywords. Its report for April lists coin as the #2 most popular term in new registrations. The report doesn’t list NFT because it’s not a dictionary word that the company would normally look for.

I asked Donuts to check for the rising popularity of the term in its domains. The company provided a graph (above) showing a massive spike in March and April in domains containing NFT.

Domain investors have registered some of these domains, but companies offering NFTs also account for some domains.

Companies are filing cybersquatting disputes against people who register domains including their brands and NFT.

But people should mind the line between being a domain investor and a cybersquatter. It might be tempting to register a domain name that includes a famous trademark and NFT. Don’t do it.

National Arbitration Forum handed down a decision today against Joseph Masci, who registered the domain NFTMorganStanley .com. It’s the third UDRP I’m aware of involving trademarked brands and NFTs. Two other cases are pending; one for GEICONFT .com and one for ComericaNFT .com and ComericaBankNFT .com.

So if you think there’s money in NFT-related domains, go for it. Just make sure not to cross the line.