Priority numbers helped companies at the beginning of the process but do not correlate closely with signed registry contracts.

Yesterday ICANN executed its contract with dotCareer, LLC for the .career top level domain names. The application had a priority draw number of 119.

A full week before, on October 2, Donuts executed its contract with ICANN for the .careers top level domain. That application has a priority number of 501.

So the contract for priority #501 was signed before #119. The apparent advantage that companies which pulled low numbers for uncontested strings had is evidently elusive.

So far 57 new TLD applications have been posted by ICANN, and their priority numbers are all over the board, ranging from #3 (شبكة) to #746 (.buzz).

There are many reasons that applications will be signed out of order despite going through the beginning of the funnel in more or less numerical order. Some applications are held up due to GAC advice, others due to contention, and many are stuck in applicants’ legal departments.

Still, I find the range rather surprising. Many applicants felt they had won the sweepstakes last December.

In the chart below, each bar represents one application. 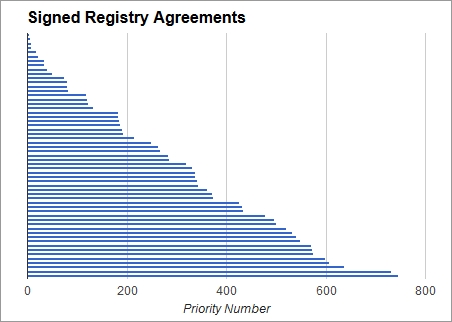 56 new TLD contracts signed, Donuts has more than half