Google Ad Planner offers some wicked cool data. Some is useful for domainers.

Yesterday I took Jay Westerdal’s advice and signed up for Google Ad Planner. This tool provides incredible site statistics to estimate traffic for just about any web site.

I think the traffic stats in Google underestimate traffic for many sites, including Domain Name Wire and DNJournal. But the richness of data puts all other sources, including the easily-gamed Alexa, to shame.

One of the coolest features shows which other sites people who visited Domain Name Wire also visited. It appears to rank these by “audience rank”, which seems to be some sort of correlation of people that visit one site and another. Audience Rank does not represent total visitors to the site, but I can’t find anything in Google’s help that discusses it.

According to Google, worldwide visitors of Domain Name Wire most commonly also visit Michael Berkens’ TheDomains site. Close behind is Elliot’s blog. If you look at just U.S. visitors, Elliot’s Blog is most closely correlated. Of course, this could have a lot to do with which sites I link to the most. 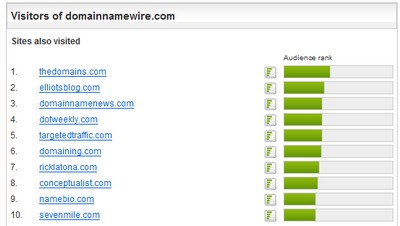 And here’s what it says for other popular sites with similar visitors in the U.S.: 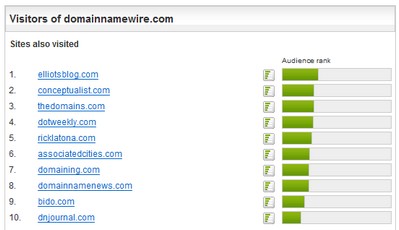 Google apparently also knows the demographics of people visiting Domain Name Wire. It says over 80% are male and better than 30% have graduate degrees.