Not only is it liquidating many of its prized domain names to make ends meet, but its prized cricket web site IPLT20.com is having problems at precisely the wrong moment. (Live Current’s deal with Indian Premier League is part of the reason it’s having to liquidate domain names; the contract requires the company to cough up about $50M over 10 years. Its cricket partners have been cutting it a break on payments.)

According to Om Malik at GigaOm, the IPLT20.com web site has been on the rocks over the weekend. Malik was excited last week when he wrote that cricket fans could watch live action on IPLT20.com, but then on Saturday called the results an Epic Fail. Saturday morning Malik tweeted “IPLt20.com is epic fail. can’t access the page for some odd reason. are you having the same problems?” 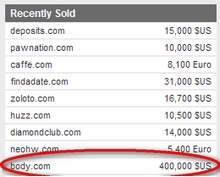 The domain liquidation at Live Current Media (OTCbb: livc.ob) continues: a reader spotted the sale of Body.com at Sedo’s Great Domains site for $400,000.

That means Live Current has grossed at least $2M from domain sales since announcing in October it would sell domain names to raise cash (assuming one more planned deal goes through).

First it sold a domain — most likely Malaysia.com — for CAD $500,000. Then it announced earlier this month that it sold two domains for $1.65M. It’s unclear if Body.com was one of those domains, but a commenter on Domain Name Wire’s story about the $1.65M transaction said he was fairly sure Body.com was one of the domains, so it’s likely part of the sum. That means there’s another sale pending for $1.25M.

I checked the whois records for the rest of Live Current Media’s domain names and didn’t see any major changes.

Including a $1M investment, the company will have about $3M in the door over a period of four of five months, assuming the remaining deal goes through.

It is enough to save the company? Only if its cricket partners continue to cut it some slack.

Live Current Media announced today that it sold two domain names for $1.65M. Like the last time it sold a valuable domain, it didn’t say which domains it sold. But unlike last time, I’m having a hard time figuring it out.

I’ve gone through Live Current’s premium domain names (on its web site here) and don’t notice anything odd about the whois records for its domain names. Perhaps the domains haven’t transferred ownership yet. Karate.com and Boxing.com show “Domain Holdings Inc” as owners, but that’s related to the Domain Strategies deal. Maybe Live Current sold both of these to Domain Strategies or one of Rob Monster’s entities and ended the partnership? Hard to say, and it’s just speculation.

These transactions are substantial enough that the company will have to report them in their quarterly SEC filings. But the two deals announced today are agreements, so they may not be completed yet.

So let’s play a game. Which two domain names did Live Current sell for a total of $1.65M? If you know anything leave a comment.

Hear the author out; he has a valid point.

The headline is inflammatory, but they aren’t my words. They’re those of Matthew Mayer. And before you call him an idot, you should understand the context.

Mayer wrote an excellent piece about what ails Live Current Media (see previous article). In it he writes:

[Live Current] owns a bunch of domain names. That’s it. They sell product through one of them, and have been trying to develop others. Unfortunately, it’s a flawed business model. Domain names have no intrinsic value. They only have value if they are developed and monetized, which is a lot harder than it sounds.

Of you and I know that domain names have intrinsic value. But in Live Current’s case, it’s not earning much from domain parking any more. It has tried for several years to make the leap to domain development, and that’s where the trouble started. Live Current has had a devil of a time trying to develop.

It entered into an agreement to pay $60,000 per month plus a profit share to develop web sites that look like this.

It struggles to scratch a few dollars from its developed Perfume.com each month.

It developed (and now parks) Body.com.

It entered into an agreement to pay $50 million over ten years to DLF Indian Premier cricket League, and has no way to pay it.

Although domain names do have intrinsic value, that doesn’t mean someone who owns good domain names can develop them. The CEO of Live Current confesses he doesn’t no squat about cricket. My guess is few people at the company know anything about cricket. How can you bet multiple times your market cap on something you aren’t passionate about? Oh yeah, it’s because the company happened to own Cricket.com. (Which, by the way, is not part of the $50 million agreement).

There’s a lesson in this for all domainers. Developing web sites is like developing businesses. It’s hard. Most will fail. And great domains don’t guarantee success.

-$275,000 cash, to be paid out semi-monthly over the next twelve months
-Other benefits of $23,000 paid out along with cash
-Still more benefits in the total gross amount of $52,000 paid in semi-monthly installments
-$250,000 in restricted stock, paid out over the next twelve months
-Up to $25,000 in relocation allowance if Ehrlich relocates to Toronto, Ontario prior to October 2009.

Does this seem like a healthy package for a company that’s losing money hand-over-fist, just laid off 38% of its staff, and has seen its market cap wilt to below $10 million? Well, he might not see all of it. The company may run out of cash before he finishes collecting.

I’ve owned Live Current stock over the years (previously called Communicate.com). The company had so much promise. But it flubbed it. Here’s a good analysis of the problem written by Matthew Mayer.

I’ll write more about Mayer’s commentary in another post, as I think it warrants its own discussion. You might find some of his opinions on domain domains inflammatory.