Cricket Communications and Cricket.com owner Global Cricket Ventures have reached a “settlement in principle” over the parties’ trademark infringement suit.

Cricket Communications filed the suit in February alleging that Cricket.com was charading as a cricket sport site but was no more than a site created to take advantage of the wireless carriers’ trademark. The company alleged that Global Cricket Ventures hard coded a Cricket Wireless logo into its web site in a position made to look like it was part of an ad.

Since then Cricket.com has removed all advertising related to wireless phones and has scaled down the site from even the basic shell that it was before.

My guess is the deal doesn’t involve handing over the Cricket.com domain name as the plaintiff wants, but Global Cricket Ventures stops displaying anything related to mobile phones. 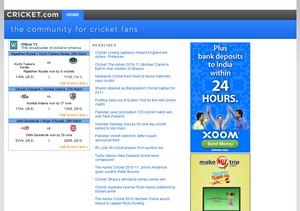 But it has drastically changes its web site to eliminate all references and ads related to mobile phones.

The site is now just a bare bones one page web site with a couple news feeds about cricket and a score board. Gone is the fantasy cricket offering and any attempt to be a “real” web site. But also gone are the many ads for cell phones.

The lawsuit will probably continue to be slowly creep forward given that Global Cricket Ventures is based on the island nation of Mauritius.

Now that Cricket.com and Global Cricket Ventures is completely separated from Live Current Media, it’s getting some new life.

GCV has exclusive digital and mobile rights to the Indian Premier League (IPL) and owns the domain name Cricket.com.

Live Current claimed to have rejected a $6 million offer for the domain name a couple years ago.

In October the company announced that Brazil.com, Vietnam.com, Indonesia.com, Malaysia.com, GreatBritain.com, and Communicate.com were all for sale. The company hoped to raise $6 to $10 million by selling the domains. The whois information for Malaysia.com changed over the past week to Malaysia Travel, Inc., which may indicate a sale is in progress. The new address in whois is a Vancouver Address, but not Live Current’s offices. It’s possible the company is selling the domain to a related company or investor, but the company has not released any information about a sale.

After a few strategy changes, Live Current is betting its business on cricket. It signed a $50 million deal with DLF Indian Premier League in 2007. Since then, the company has been unable to make required payments, which were forgiven. The company also recently launched a web site at Cricket.com. Its major source of revenue is Perfume.com, an online fragrance shop. The company launched a similar site at Body.com, but it has been closed down and is now a parking page at Sedo.

Live Current Media (OTCbb: Livc.ob), owner of such prized domains as Cricket.com, Perfume.com, and Brazil.com, faces a serious cash crunch. The company reported earnings and released its 10-Q over the weekend, but it’s the balance sheet that demands the most attention.

For the quarter ending September 30, 2008 Live Current generated $1,954,684 in revenue, with nearly all of it coming from its Perfume.com operations. The company generated only $20,000 in domain advertising revenue this quarter, compared to $128,000 in the same quarter last year. Live Current canceled its pay-per-click advertising contract because it was overly restrictive. The biggest PPC domain in the past was Cricket.com, which has since been developed into a real web site.

The company reported a gross profit of $352,435, but expenses of $2,343,285. The math doesn’t work out too well, especially when you figure in additional expenses over $1 million related mostly to its cricket venture.

The company now has less than $1 million in current assets including cash. Its cash position would be even worse if its cricket partners didn’t cut it a break on required payments:

On or about October 1, 2008, the Company was scheduled to make a payment to the BCCI in the amount of $625,000 and a payment to the IPL in the amount of $375,000, in connection with the Global Cricket Venture. Subsequent to quarter end, the amount owing to the BCCI was renegotiated and decreased to $125,000. In addition, the payment of $750,000 that will be due to the BCCI on October 1, 2009 was eliminated entirely. The payments due to the BCCI and the IPL for the October 1, 2008 commitment, although negotiated to a lesser amount, have not been made to date. Discussions are underway with both parties with regards to the timing of such payments and payments will then be made accordingly. Such payments may be subject to certain withholding or other taxes which the Company may be required to gross up pursuant to the terms of the MOU.

Can Live Current survive? Its latest 10-Q sheds doubt on its ability to continue as an ongoing concern:

The Company’s ability to continue as a going-concern is in substantial doubt as it is dependent on continued financial support from its investors, the ability of the Company to raise future debt or equity financings, and the attainment of profitable operations to meet the Company’s liabilities as they become payable.

The company had hoped to complete a follow on stock offering buoyed by its high stock price earlier this year. After a flattering article was published in Kiplinger, the company’s stock skyrocketed to over $3.00 this year, but closed at only $.65 last Friday. In an effort to raise cash, the company announced it is attempting to sell 6 of its prized domains to raise $6-$10 million. Although possible, the current economic environment makes this much more challenging.

Some of the company’s recent moves are questionable, such as buying Auctomatic, which seems to have little relation to the company’s business. Auctomatic helps people sell items through eBay. Of course, at the time of the purchase Live Current probably expected to be able to raise more cash for its business through a stock offering.

[Note: the author owns or has owned stock in numerous domain name companies, including Live Current.]