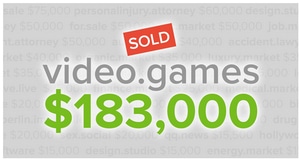 New top level domain name company Rightside today revealed 53 new TLD sales it has made for $10,000 or more. The company has made 85 such sales in total; the 53 are ones in which the buyers allowed the company to reveal the sales.

The list is led by Video.games, a domain name the company sold in February for $183,000. The buyer currently uses Whois privacy, but a historical Whois record shows that the buyer is likely an individual game developer in California.

Three names sold for at least $100,000, but some of Rightside’s sales aren’t included. Only five of its top ten sales are disclosed.

Notably missing from the list is 3D.software, which the company previously revealed sold for six figures.

So, what does this data reveal?

It depends on how you look at it. On the one hand, all of these sales are good sales. On the other hand, it’s a relatively small number for 40 top level domains.

In fact, the list publicly released today only has names for 17 of the company’s 40 TLDs. Even if the names were evenly spread, there would be an average of just two per TLD.

17 of the names are in the .market top level domain, and most of the domains I checked are registered with Whois privacy at Epik.

15 unique buyers are responsible for the purchases, Rightside says.

Does the data show a robust market for premium new TLDs? Or are they merely “lottery ticket” sales that come from owning such a large portfolio of domains? I’m curious what readers think.