DNForum has been offline for a week. 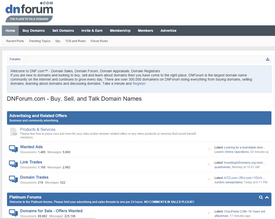 I’m calling it: DNForum is dead.

What was once the industry’s go-to place to discuss domain names has been down for a week. I’ve tried to contact forum owner Adam Dicker about it over Skype, but I have not heard back.

DNForum used to be the place people went to get deals done, and there was a golden age when people were buying and selling high-quality domain names on the site. Over time, it became filled with crappy domain names and its role in transactions started to wane. Blogs started taking over the conversation about what was going on in the industry, further reducing the importance of the site.

Last year Dicker, who has apparently run into financial difficulties, sold the site’s shortcut domain name DNF.com. The forum continued to operate at DNForum.com, however. Until one week ago, when it suddenly went offline.

I think few people noticed its absence. There used to be a time where DNForum being offline would have elicited lots of “DNForum is down!” posts. But most people who still chat on domain forums had already left for NamePros.