Neither of them won .cloud, which begs a big question.

I’m basing that on the seven applications it received, and that Amazon.com, Google and Symantec all applied for the domain name.

So which one of these heavyweights won the rights to .cloud? This one: 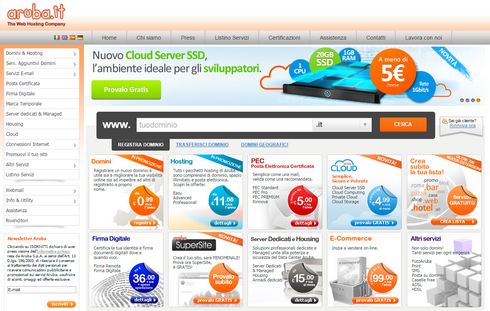 Wait – what? That cartoonish logo doesn’t match any of the heavyweights that applied for .cloud.

Aruba S.p.A., an Italian webhosting company, won the battle for .cloud against some of the world’s largest cloud companies.

This isn’t the only battle Amazon.com and Google have lost so far, and that has caught many by surprise. A common refrain from new TLD applicants that found themselves pitted against one of these heavyweights on “reveal day” was that they couldn’t win.

Amazon has won some big auctions, such as .buy. And it has picked up less-desirable top level domains like .spot. But it has also lost contention set decisions for .cloud, .group and .video — which are certainly some of the more valuable TLDs.

Google’s losses seem to heavily outweigh its wins. It lost all three public auctions it participate in during September. It has lost challenges for .cloud, .book, .dog, .site, .live, and the list goes on and on.

Why is this happening, and what does it mean for new TLDs?

They were wrong about Amazon and Google having the wherewithal to win all of these auctions. Yes, they have the cash. But winning every auction they participate in is a whole lot of cash for a highly risky business idea.

Sure, Google or Amazon can afford to spend $20 million on any one TLD. But does it make sense to spend a half billion dollars to get all of the TLDs they applied for?

I can picture Google’s domains team getting budget for new TLDs. But asking for a half billion dollars for an experiment?

I’ve also heard that one of Google’s new TLD executive champions left the company. Often, an executive suite champion is needed to see a project to fruition. Having worked at a Fortune 500 company, I’ve seen plenty of initiatives (even those with lots of sunk cost) get shelved for political and monetary reasons. And “just because”. Regardless of how big a deal new TLDs are to new TLD companies, these things are just a spec on the wall at Google and Amazon.

It’s also possible that both companies simply “have their number” for how much each TLD is worth, and people are paying much more.

Now that people see Amazon and Google losing these domain auctions, what does it mean for new TLDs?

On the one hand, it creates opportunity for some of the smaller players to really push new TLDs forward. Spending $5 million is a big deal to the smaller guys. I assume they’re going to try to make a business of it, whereas Amazon might let TLDs sit on the shelf.

The glass is half empty viewpoint is that Google and Amazon don’t see as much value in new TLDs as people thought they did.

My opinion: neither of these companies like to waste money just because they can.

Roundup: this week in the Domain Name Business