.CEO marketing is not well executed.

I’ve written before that .ceo as a standalone domain name doesn’t make sense to me. I see some potential for a network for CEOs, and the company behind .ceo has plenty of experience with social networking. But that wouldn’t be about a domain, it would be about a network.

dotCEO sent out an update on its first 30 days yesterday. It doesn’t look good and has me scratching my head even more. It seems .ceo is dropping the ball on marketing, which is exactly what their apparent prowess is.

The company has 1,023 domain registrations, although 93 of these are “promo”, which presumably means free. (I’ll give the registry a nod for mentioning that some were promotional; other registries are just inflating their numbers this way.)

The home.ceo site shows the number “3,568 Influential CEOs”, which doesn’t jive with the numbers they just put out.

Then again, the home page of home.ceo highlights six CEO profiles with lots of errors. It says Christine Jones is governor of Arizona. Five of the six examples it shows are from the domain industry. The one that isn’t gets paid to promote .ceo. Oh, and only four of the six resolve to a website. Even .CEO CEO Jodee Rich’s .ceo web address doesn’t resolve!

The emailed update shows “Hot dotCEO Domains Sold”, including LarryEllison.ceo and four other CEOs (of L’oreal, McDonalds, GoDaddy, Zoetica Media). Only the last one resolves to a site, and it’s basically a .ceo template page. (The template pages remind me a bit of .tel, honestly.) I the four big names were defensive registrations.

Under the headline “VIP CEO Identities”, the company shows four example pages like this: 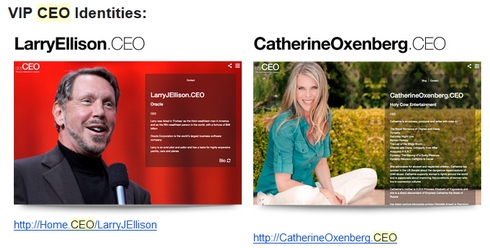 This makes it appear that Larry Ellison is really on board and has created a site. After all, he was highlighted in the “Hot dotCEO Domains Sold” section. But notice that the URL below the picture is not LarryEllison.ceo. Instead, it’s one of the dotCEO’s own placeholder pages. The update seems designed to look like Larry Ellison is a supporter (or at least user) when he isn’t.

The other three examples are all owned by the registry.

I expected .CEO to run a heavy marketing blitz across social channels. It’s certainly marketing, but it seems to be falling flat.

What do Amazon and Google domain name losses mean for new TLDs?