Vaynerchuk makes a prediction about domain name values during talk at DomainFest in Hollywood. 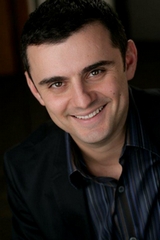 Yesterday Gary Vaynerchuk gave a spirited keynote at DomainFest, with an even more spirited Q&A session.

Vaynerchuk thinks that the importance of domain names is being eroded by other platforms such as apps. To some people, the value of getting a good app name is more important than a good domain name.

While most of us still buy stuff through websites, our kids might be completely comfortable buying stuff through apps instead of websites.

Let me be clear about what he conveyed.

First, he wasn’t saying the value of .com’s will go down in the wake of new TLDs. He was speaking about domains in general.

Second, he’s predicting a slow devaluation and doesn’t think the importance of a good domain will go completely away. He said he’s not predicting domain names will go the way of the dodo bird.

There was quite a bit of back-and-forth about this with follow on questions from the audience. Aren’t apps a closed ecosystem? Won’t certain platforms go the way of MySpace? (At the same time, I heard some A-Mens in the audience in response to Vaynerchuk’s prediction.)

Perhaps. But Vaynerchuk’s real message was this: don’t romanticize the past of your business. Just because something worked 5 or 10 years ago doesn’t mean it will work in the future. You have to constantly change as the world changes, and sitting back on your laurels is a sure fire way to lose in the long run.

Vaynerchuk also noted it’s just his prediction and he could be wrong. And because the session was recorded, we’ll be able to replay it 10 or 20 years from now and see if his prediction comes true.

5 Questions to be Answered at DOMAINfest