Growth in .Com/.net base slows down thanks in part to search engine changes.

Michael was referring to my earlier article that stated the numbers he used in his own post saying .com/.net growth had slowed to a crawl weren’t a fair comparison, and that historically .com growth rates have been on a steady but measured decline.

While that’s true (the actual numbers released yesterday were higher than the zone file, which is measured differently), Michael definitely spotted a trend. .Com/.Net growth rates are retreating. (I’ll buy Mike a drink at the next free cocktail hour at a conference.)

VeriSign missed the low end of its quarterly forecast by over 200,000 net adds, increasing the .com/.net base by merely 1.37 million domains. Although that’s not no growth, it’s certainly much lower than anytime since 2009.

This morning I reviewed all of VeriSign’s quarterly reports dating back to Q4 2006. Here’s what I found for .com/.net numbers combined: 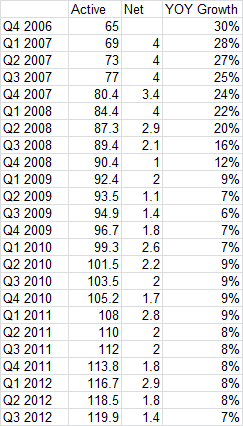 These numbers are what VeriSign reported in their quarterly financial releases. A couple notes: you can’t directly compare the zone file numbers Verisign publishes on its web site to these numbers since Verisign calculates them differently. Also, it appears Verisign sometimes rounded its .com/.net base to the nearest million until Q4 2007, which also affects the “net” quarterly growth.

Yearly growth rates were strong until Q1 2009, when suddenly growth dropped to the single digits. As the base gets higher, percentage differences are harder to maintain. But you see it in the absolute numbers as well (the third column is net adds quarter-to-quarter).

.Com/.net was humming along through 2007, adding another 4 million to the base most quarters. In Q2 2008 it started slowing to 2-3 million domains a quarter. Then in Q4 2008 and into 2009 it was 1-2 million a quarter as annual growth rates dipped into the single digits.

On yesterday’s investor conference call, Verisign blamed Google in part for this slowdown. Google was one of the culprits seen in 2009, too.

As Google tweaks its algorithms to favor high quality content, it’s pushing down the rankings for sites that are just there to make a quick advertising buck. Domain registrations for these sites were driving a substantial amount of growth in .com/.net. (Verisign notes “domainer” along with “made for Adsense” and similar sites. Parked pages have been mostly out of the Google index for a long time, but they were replaced with other types of low-content sites.)

I think there is a more serious effort by the search engine algorithm players here to sort of clean up search results and improve the quality, as Pat said, to drive some of the monetization community down further. So we discussed in the last call, the Panda and Penguin programs, for example, that Google utilized where they were targeting content farms, they were targeting keyword stuffers and now, they’re also targeting exact name matches, which typically are monetization names often. So for example, if you search for purple blue widgets, and purplebluewidgets.com happens to be a registered domain, that in the past, would’ve been likely to score very high in the search results. However, if the search engine algorithm is tweaked to go out and consider other factors, the age of the domain, how many pages are on it, how fresh is some of the contents and give it a score, essentially, on how likely it is that it’s truly quality content that the searcher might be interested in versus something that had been set up for monetization purposes, I think the search engine algorithms are essentially targeting that kind of traffic to get it out.

Patrick S. Kane, Senior Vice President and General Manager of Naming Services, noted that some monetizers are moving to free domains to clear more profit from monetization. He points out .tk in particular.

Is there a silver lining? Bidzos thinks so:

But I think there might be some developments where other domains have sort of other TLDs have targeted in a sense, this monetization community and possibly, some of those names may have been drawn away over the years and moved to other areas, which is, in a sense, a good thing because it means that these changes, while they are making a difference and I know you see that every day, we do too, of course, and while it may take longer to recover depending on how intense and how sustained these campaigns are, the fact is that there may be fewer of these names to work on in .com because of the move to other TLDs.

In other words: the fewer the domains in .com/.net registered strictly for monetization, the lower the impact these sorts of search engine changes will have.

What Verisign is saying makes sense. I let about 3%-4% of my portfolio drop this year. Almost all those names were names monetized with made for Adsense sites. These sites covered their registration fee two years ago but not anymore.

One quarter doesn’t make a trend. Until this quarter things were pretty steady for .com/.net. But more woes are on the horizon: VeriSign forecasts 0.9 million and 1.3 million net adds in fourth quarter. It hasn’t seen numbers like that since 2009.