Over a half year later, Twitter finally gets high traffic typo.

Last year Twitter filed a cybersquatting complaint against the owner of the Twiter.com domain name.

Twitter was rightfully upset about the high traffic typo domain as it forward to a “survey” that mimicked the look and feel of Twitter’s own web site.

Twitter dropped the case only to refile it shortly thereafter. A UDRP arbitration panel finally ruled in Twitter’s favor in November 2011.

But that’s not the end of the story. The domain name remained in the registrant’s ownership until just recently. On June 21, 2012 the domain transferred over to PBC Escrow’s legal escrow department. Yesterday the domain was finally transferred to Twitter: 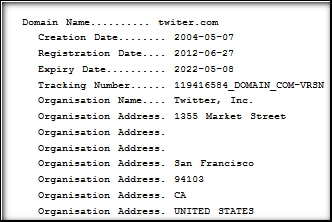 The domain name does not currently resolve, but I expect Twitter to forward it to its web site soon.