…but didn’t apply for the top level domain.

Chicago.com, Inc., has filed a trademark application with the U.S. Patent and Trademark office for the DotChicago mark. But Chicago.com founder Josh Metnick says his company did not apply for the top level domain .Chicago with ICANN.

The application claims that Chicago.com, Inc. has been using the mark in commerce since “as early as 05/01/2012”. As proof, the application includes a copy of this page from Chicago.com’s web site. 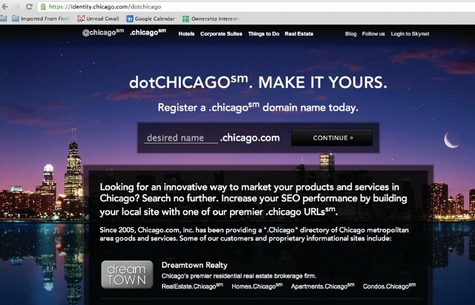 This isn’t actually for second level domains; it’s for third level domains such as realestate.chicago.com. The examples listed on the page resolve to Google Sites pages.

The page also states “Since 2005, Chicago.com, Inc. has been providing a “.Chicago” directory of Chicago metropolitan area goods and services.”

Metnick told me Chicago.com has been offering these domains since 2005.

The wording on the page may seem peculiar for a third level domain. But Metnick claims “for domainers it’s probably confusing, but for most business owners it’s not.” The message on the @chicago Twitter page is more clear: “Get yourname@chicago.com or register your idea.chicago.com”

Chicago.com has had quite a bit of success parceling off identities under the .chicago web address, including selling e-mail addresses. Some people who have bought email addresses have also picked up the corresponding rights to the third level domain.

Chicago.com has two granted U.S. trademarks including THE .CHICAGO LOWDOWN for its newsletter. It tried and failed to register .chicago with the U.S. Patent and Trademark Office in 2005.

It also has a number of State of Illinois trademarks, including .chicago. It has filed trademarks for some of its third level domains, too, but in a way that makes them look like second level domains. One example: realestate.chicago.

This could make for an interesting scenario if .chicago ever exists as a top level domain.

“We want to own the top level domain,” Metnick admits. “That’s our goal. We’ve been using the name since 2005 and we don’t know anyone else who’s using it…They’re our marks. We were the first ones using them.”

Metnick says his company might apply for .chicago (the top level domain) in the future if it has the resources.