A visit with domain giant Oversee.net in its L.A. headquarters shows how the domain world is growing up. 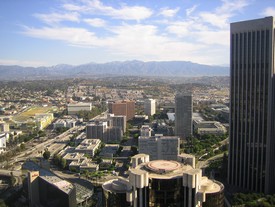 When you get off the elevator at floor 44 of 515 S. Flower St, you see sweeping views of Los Angeles, trendy furniture, and glass-enclosed conference rooms. You might think you’re in the office of an advertising agency or prestigious consulting company.

You certainly wouldn’t think you were at the headquarters of a company that got its start on Skid Row and moved out after finding a dead body in the office’s parking garage.

But this is the epicenter of Oversee.net, parent company of DomainSponsor, Moniker, and SnapNames.

The company has come from humble beginnings and a handful of people to a Class A office on two floors of a downtown Los Angeles high rise.

Oversee marketing manager Vivian Tran gave me a tour of the office. It reminded me partly of the dot.com days (game rooms, stocked kitchens) but also a trading floor (monitors beaming with parking stats and spreadsheet jockeys fine tuning sophisticated algorithms). I met co-founder Lawrence Ng in his corner office, but rather than focusing on him my eyes were drawn to views of both Hollywood and Dodger Stadium.

The domain name industry has grown up, and nowhere is it more evident than walking around Oversee.net. Fresh with a $150 million injection from Oak Hill Capital Partners and with no debt on the books, the company is poised to be a major force in the domain world as it moves from its adolescence to a true business. It’s moving from a club of (mostly) guys rolling the dice and coming up 7 to an organized, profit-focused industry facing the everyday realities of business.

Some people mourned the entrance of outside capital to the domain markets. And they laughed as many venture backed companies, such as Geosign and iREIT, seemed to squander the money thrown at them by sophisticated investors.

Even if outside money doesn’t flow like it once did, that won’t stop the domain world from growing up and becoming more sophisticated. Look no further than the 44th floor of this office building.

[I’m back in Austin but taking the day off to spend with my daughter. Later today I’ll publish more information about DomainSponsor’s DOMAINfest. Next week I’ll publish articles about my visit with Oversee.net, as well as stories developed through my visits to ICANN, Thought Convergence, and the offices of the .org king.]