Fake domain name renewal emails are nothing new, but some aspects of one making the rounds are.

A Domain Name Wire reader received a fake renewal notice today. Instead of being sent from the scammer, the person sent it as a PayPal invoice. Here’s what it looks like: 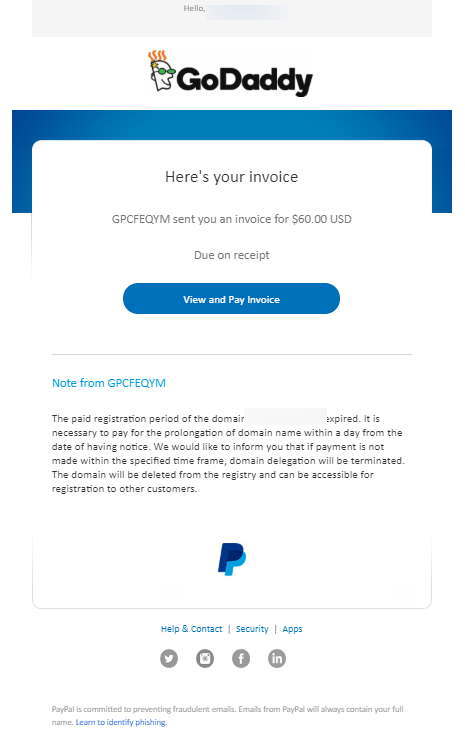 A message on the invoice states:

The paid registration period of the domain [domain] expired. It is necessary to pay for the prolongation of domain name within a day from the date of having notice. We would like to inform you that if payment is not made within the specified time frame, domain delegation will be terminated. The domain will be deleted from the registry and can be accessible for registration to other customers.

The link goes directly to PayPal to make the payment, and the invoice includes the GoDaddy logo: 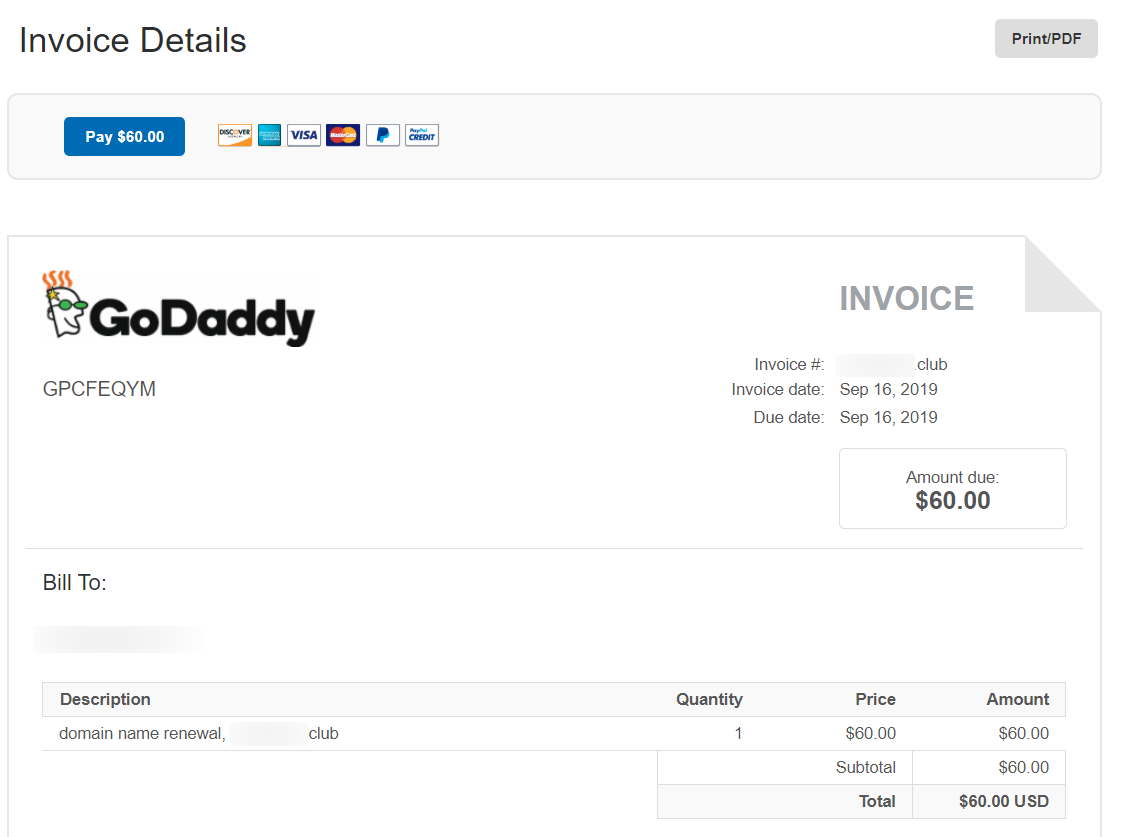 Anyone can upload the logo of their choice when sending PayPal invoices. They’re supposed to use their own logo, though.

Clearly, the scammer is harvesting Whois to send these invoices.

The good news is that PayPal offers buyer protection, even for intangible goods. I suspect PayPal will be on to this quickly as it has systems in place to prevent scams. 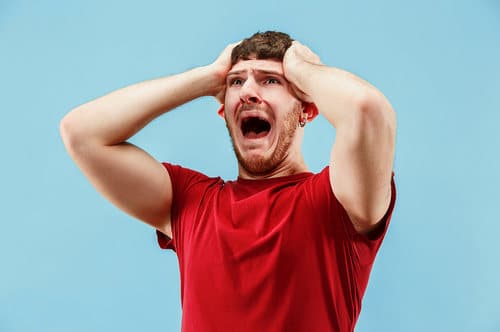 Victims failed to notice the registration date of the domain name used to initiate the scam.

Note the recent creation date on this domain used in a scam.

A Wendi Deng Murdoch imposter tricked photographers into paying for flights to and photography permits in Indonesia, and a more thorough Whois lookup could have saved the victims from losing money and time.

CNN reports about the scam that duped photographers Henry Wu and Carley Rudd. I must say, it’s much more elaborate than most scams that land in your inbox. It was well-researched and thought out.

The photographers were tricked into flying to Indonesia and buying photography permits for a gig. They later found out it was a scam and pointed out that they overlooked something obvious. The emails they received were from the domain wendimurdoch.com. That led credibility to the scam, but it turns out the domain was registered only recently:

Wu told CNN, “we overlooked the red flags. I did a DNS (search) on the (wendimurdoch.com) domain, overlooked that it had been registered a couple of weeks previously.”

Lawsuit alleges that someone made away with $66,000 in fake token presale.

Even if you have a great domain name, people can get confused by other domains that use your brand name. Just ask Orchid Labs, a company creating a decentralized hosting network to avoid censorship.

According to a lawsuit (pdf) the company filed, someone set up a website at Sale-Orchid(dot)com designed to mimic the Orchid.com site. The fake site told people to send Ether in order to participate in a pre-sale of the company’s cryptocurrency tokens.

To make matters worse the perpetrators are sending e-mail messages out to various people pretending to be Orchid including potential purchasers presently in discussions regarding participation in Orchid’s actual private token sale. Such fake e-mails provide links to the fraudulent website at http://sale-orchid(dot)com.

According to the lawsuit, people have been duped out of $66,000 worth of Ether.

The court issued a temporary restraining order and the site has been taken down. But it would be pretty simple to set up another site like this.

Once GoDaddy received the TRO it deactivated the domain name and removed the Whois privacy. The Whois now shows the organization to be Orchid Labs and the name Patrick Dietzen. The order didn’t demand the transfer of the name, so I’m curious what the story is here. Maybe someone used fake information in Whois.

Here are some tips to limit the chances you fall for a scam.

Domain investor Richard Dynas posted a story on NamePros yesterday about getting scammed in a domain name transaction. He paid for a domain name that a scammer didn’t own.

Dynas is embarrassed, and when you read his story you will understand why. There was not just a single red flag in this transaction; there was a sea of red flags. Burning hot red flags.

But we’ve all been scammed, suckered, or made a bad deal in life.

One story I tell is being duped out of twenty bucks in San Francisco. I was in line to enter a parking lot and the lot attendant was collecting the $20 entrance fee. The three cars in front of me paid, then it was my turn. I pulled up, he handed me a yellow dashboard ticket and asked for $20, and I handed it over.

As I was parking I saw the official parking lot company van pull in and the “attendant” ran off.

What just happened? That guy was the attendant. He had an official-looking windbreaker on. He had the yellow tickets. Everyone else paid him.

But we’d all been duped by some random guy who made $80 in about five minutes.

It was only $20 bucks, but you get that nasty feeling in the pit of your stomach when you get duped. And you learn lessons from it to make sure it doesn’t happen again.

So kudos to Dynas for posting his story. And here are some of my tips to reduce the chances that you get scammed in a domain name transaction: END_OF_DOCUMENT_TOKEN_TO_BE_REPLACED