Two new top level domain names enter general availability this week, although one won’t be generally available to the public.

.Bank domain names become available on Wednesday, June 24. Most readers won’t be able to register them, though. It’s a restricted domain name for banks and savings associations. DomainNameWire.bank isn’t an option. Most big market domain name registrars aren’t carrying the domain for this reason.

.Irish domain names hit the market on Thursday, June 25. This is an unrestricted domain name, so anyone anywhere in the world can pick up .Irish names. I don’t usually make recommendations for which registrar you should use to register domain names. But in this case, you might give the nod to Michele Neylon’s Irish domain name registrar Blacknight.

Another thing to keep in mind this week…Donuts continues to make available domain names that were on the name collision list. Domain names in 14 TLDs related to business (e.g. .ventures, .company) will revert to regular pricing on Wednesday. Domain names in a dozen TLDs labeled as “Generic and Fun” (e.g. .cool, .wtf) enter Early Access on the same day.

But not fast enough for some registrars that fear losing their accreditation.

ICANN Vice President of Domain Name Services Cyrus Namazi has sent a letter (pdf) to domain name registrars regarding their concerns over legal implications of the 2013 Registrar Accreditation Agreement (RAA).

In a nutshell, the letter says ICANN is still exploring resolution to conflicts with local laws. In the meantime, some accredited registrars’ ability to sell new top level domain names — and soon .com domain names — is in limbo.

The 2013 RAA includes new requirements on data that require domain name registrars to retain certain data for a length of time after a customer leaves them. Many registrars, particularly in the European Union, believe the rules violate their local laws.

The RAA includes a provision for registrars to get a waiver to the retention policies in order to comply with local laws. But that process isn’t going smoothly nor quickly.

As a result, many domain name registrars haven’t signed the latest RAA. Signing the RAA is a requirement to sell new top level domain names, so many European registrars aren’t selling them yet.

Not being able to sell new TLDs is kind of a big deal to registrars. But there’s a ticking time bomb that makes this issue even more serious. The last RAA came out in 2009 and lasts for five years. That means that many registrars are about to have their accreditation expire unless they sign the 2013 RAA.

If you lose your accreditation, you lose the ability to sell gTLDs like .com.

Namazi’s letter to registrars, which effectively says “we’re working on it”, will provide little comfort to registrars that feel their entire business is in limbo.

ICANN has known about the issues for over a year. They delayed providing any form of “process” for requesting waivers until October of last year, which is 6 months after the final version of the RAA was published and 4 months after the first registrars signed on.

Over a dozen EU based registrars have requested waivers from ICANN. All have invested time and money in seeking external legal advice as per ICANN’s broken process. That EU based companies need to even go through this process is laughable, as we are effectively being asked to request permission to not break our own laws. Meanwhile the EU DPAs, as represented by the Article 29 Working Party, have repeatedly told ICANN that the clauses in question are not compatible. ICANN’s response to them as well as us has been to delay matters.

While I cannot speak for every individual EU based registrar I know that any I have spoken to are both frustrated and angry. ICANN’s inability to address this issue is impacting our ability to do business.

Should we now sue ICANN for loss of earnings?

NameCheap appears to have the cheapest overall pricing on new TLDs among the largest domain name registrars.

So far, these new TLDs aren’t cheap. You can register 2-4 .com domains for the same price as one new TLD in most cases. That adds up in a hurry.

I did a quick price comparison this morning on three of Donuts’ available domain names. They make up Donuts’ three apparent price tiers thus far.

I checked pricing at what are generally considered the top 10 domain name registrars, combining multi-brands (e.g. Web.com for Network Solutions and Register.com). For reseller-only services I used their retail brand (BigRock for ResellerClub and Hover for Tucows).

Here’s what I found: 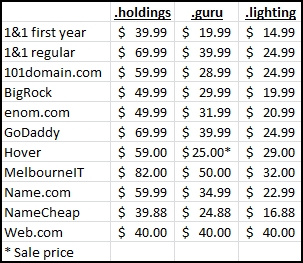 * NameCheap.com was across the board cheapest on “regular pricing”.
* 1&1 has first year pricing and then ongoing pricing. The first year discounts are substantial, so if you’re trying to quickly flip domain names then this might be a good option for you.
* Web.com has a strange pricing anomaly, charging the same for all of Donuts’ domain names. This means its .holdings pricing is relatively low compared to other registrars.

This pricing is for current hand registrations of available domain names. If you’re pre-ordering, each registrar has its own pricing and refund policy if unsuccessful. Also keep in mind that some registrars are better than others at grabbing domains when they become available, and some are less likely to have competing pre-orders.

Panels will not always ignore the top level domain name in UDRP cases.

Many people believe that the top level domain name is ignored by panels when it comes to confusing similarity. In other words, if the domain at issue is trademark.com, the panel will say that the mark only has to match the second level domain, not “trademark com”.

It’s true that in this exact case, the panel will usually note that the top level domain should be ignored, and will cite precedent.

Note the precedent language. The actual UDRP language says nothing about ignoring the top level domain name. The only reason most panels ignore it is because it is typically irrelevant.

Sometimes it’s not irrelevant, as with the domain hack Tes.co, in which the panel ruled that the domain name should be transferred to retailer TESCO.

The top level domain name will certainly be considered in certain types of cases going forward, and perhaps not just for confusing similarity.

The first is when the top level domain name is a topic or industry that relates to the mark holder. For example, if you register GAP.clothing, the panel is going to score a point for GAP when it files a UDRP against you, perhaps in the bad faith section. The panel might give you more benefit of the doubt if the domain is Gap.guru, because perhaps GAP stands for something else.

The second category is domain hacks similar to the tes.co case. There will be a lot more domains considered domain hacks in the future. Consider Austin.Ventures, which the venture capital firm now uses. (I once surmised that Austin Ventures would pay for the domain in Early Access Program since it’s a Donuts investor. Turns out Donuts reserved the domain for them.)

The objections were brought by FairSearch and Initiative for a Competitive Online Marketplace, both organizations made up of Google competitors.

This is FairSearch’s third failed objection against Google. It also objected to .fly and .map.

The panelist in both .search objections granted that both objectors had standing, and even agreed that “search” is a community.

The community discussion was rather interesting. Panelist Erik Schafer said he was basing his decision on what a community is based primarily on “Implementation Guideline P, Annex C to ICANN GNSO Final Report, Introduction of new Generic Top-Level Domains, 8 August 2007.” That’s five years before applications were due and well before the Applicant Guidebook was created!

The objections failed because the objectors were not able to show a likelihood of material detriment to the community from Google being delegated the domain names.

FairSearch certainly made some stretched arguments in its case. This one is my favorite:

Objector also contends that ceding the TLD ‘.search’ to Applicant alone would create confusion, leading consumers to believe Applicant has been endorsed as the chief, or even worse, the sold provider of Internet search services.

Endorsed by whom? The Internet gods?

Google still faces competition, including by Amazon.com, for getting the .search domain.