There are a couple interesting tidbits in SEC filings for Donuts acquisition of Rightside (NASDAQ:NAME) that are worth sharing as they could be important to companies in the domain name industry.

The first involves how much Donuts is actually paying for Rightside’s assets. The purchase price is $213 but Rightside has a lot of cash on hand after selling Enom and its half of NameJet to Tucows earlier this year. In fact, a draft of the acquisition agreement required Rightside to have $83 million of cash in hand at the expiration of the offer. While that number might have been negotiated again later, its inclusion in the tender statement suggests that’s about what the final number will be.

That means Donuts’ actual outlay for Rightside’s assets net of cash is about $130 million excluding deal costs of roughly $10 million. So the registry business (40 TLDs plus registry services), Name.com and the Aftermarket business (about 300k domain names and a parking business) were valued at $130 million.

The other figure is much smaller but might be relevant to domain registries. During the first five months of this year, Donuts paid Rightside $0.8 million for Rightside providing registry services for Donuts 200 top level domains. In the past couple of years the total deal value for this registry services agreement has been less than 1% of revenue, so likely in line with under $2 million per year.

Of course, Rightside and Donuts have always had a unique relationship given their partnership on new TLDs. Also, no other new TLD company has the scale of Donuts when it comes to number of TLDs. Still, this figure could give some indication of the current value of providing technical registry services.

By the way, Name.com’s wholesale fees paid to Donuts for selling Donuts new TLDs in the first five months of the year came in at $0.7 million.

Donuts’ purchase of Rightside might be coming to a conclusion.

There has been a bit of activity regarding Donuts acquisition of Rightside (NASDAQ:NAME).

Offer issued: The tender offer was issued on June 27 and is valid until July 26, 2017 at midnight, which means the deal could close shortly after that. Rightside just needs a majority of shares to be tendered in order for the deal to go through. Otherwise, the tender deadline can be extended.

Practically speaking, small shareholders don’t need to do anything. You’ll still get paid $10.60 for your shares even if you don’t tender, but the money will come a bit later. If you don’t tender you also keep appraisal rights.

Lawsuit settled: Rightside and the other parties have entered into a settlement deal over the lawsuit a shareholder brought over the acquisition. These lawsuits are part of doing deals, and the real winner is the law firm that might get a mootness fee. Rightside made this additional disclosure as part of the deal.

ICANN approves: Because of the new top level domain contracts Rightside holds, it needed ICANN to approve (or not oppose) the deal. ICANN granted its approval on July 15.

Unsurprisingly, Rightside has been sued after announcing its planned sale to Donuts.

The lawyers are circling.

Up until 2015, nearly 90% of merger and acquisition deals over $100 million were litigated like this. The number dropped significantly last year after a judge shot down a “Disclosure-Only Settlement” involving Trulia. Disclosure-only settlements basically require the company to disclose more information and pay the lawyers’ fees. The shareholders don’t really get anything out of these settlements.

The suit against Rightside claims more should have been disclosed, but also takes issue with deal lock up terms that do not permit Rightside to shop the deal and a $7.7 million breakup fee due to Donuts if the deal falls through.

Amusingly, it appears the lawyers took some of the language for the lawsuit from an old SEC filing or investor presentation. It states:

The Company currently has 16 million domain names under management, more than 20,000 distribution partners, an award-winning retail registrar, and the leading domain name auction service through its NameJet joint venture.

The only part of this statement that was accurate after Rightside sold its eNom business to Tucows in January of this year was the retail registrar portion.

Rightside had to sell and Donuts is the logical buyer.

Last week, Donuts agreed to acquire Rightside (NASDAQ: NAME) for $213 million. As luck would have it, I was vacationing in Costa Rica when the deal was announced. I gave some initial thoughts right after the news broke, and now I’ve had more time to think through the deal and the ramifications.

Rightside had to sell

There was no question that Rightside was going to be acquired or go private in some way. After selling eNom to Tucows for $83.5 million earlier this year, the company was just too small to remain public.

It also had lots of pressure to perform, and the numbers weren’t heading in the right direction.

It had to sell eNom because it was about to lose its biggest customer. This move increased the attention on new top level domains, and new TLD revenue was stalling. 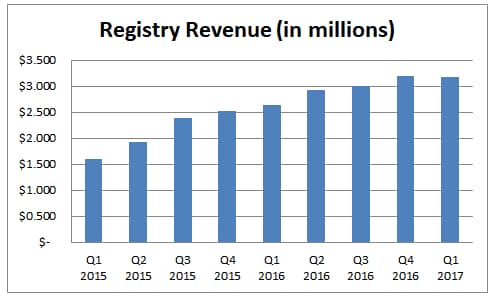 Revenue grew as the company launched top level domains, but stalled once the funnel of new domains dried up. END_OF_DOCUMENT_TOKEN_TO_BE_REPLACED

Investor wants other Rightside shareholders to vote “no” again this year.

Investor J. Carlo Cannell, whose clients collectively own about 8.5% of Rightside (NASDAQ:NAME), is continuing to push for changes to the company’s board.

On Friday, Cannell filed with the SEC and said Rightside’s board is exhibiting “value-destroying behavior” and needs “truly independent and rigorous representation.”

To that end, he’s asking shareholders to vote against Rightside’s slate of three board members at the upcoming annual meeting.

He made the same request last year but it didn’t go anywhere.

He also said he’s going to release “presentations that highlight severe errors of judgment by principals and affiliates of Oak Investment Partners, a representative of which currently serves on the Board of Rightside. Cannell is preparing to release these presentations to Rightside shareholders by and by.”

Cannell has identified ten board candidates that he wants Rightside to interview.

I reached out to Cannell’s firm on Friday via phone and email to ask for more details about what he doesn’t like about the company’s current strategy. I have not received a response yet.

He has previously voiced his displeasure over the company’s focus on new top level domain names. He later said he approved of the company’s sale of eNom but not the price.