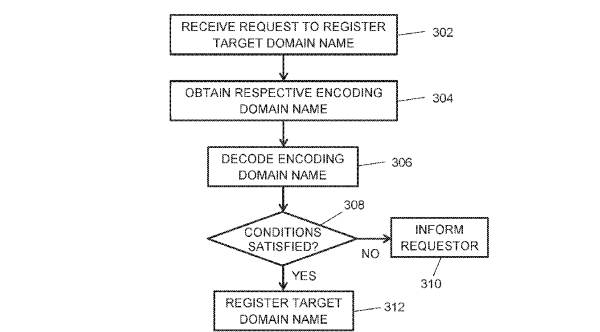 A schematic from Verisign’s patent.

Last year I wrote about an intriguing patent application from Verisign (NASDAQ: VRSN), the company that runs the .com namespace. The U.S. Patent and Trademark Office has now issued patent #10404650 (pdf).

The patent describes ways to change up the expired patent game.

One way would be to issue encoding domain names that give people the right to buy a domain upon its expiration. For example, if you wanted to get the domain example.com when it expired on March 28, 2020, you could register the domain dn–example-20200328.com.

The right to register the domain upon expiration could be transferred to someone else by transferring the encoding domain.

Additional embodiments include allowing priority to register domains from a pool of domain names.

Some of Verisign’s patent applications seem to be geared to changing how expired domains are captured, and this could be one piece of the puzzle.

When I wrote about the instant patent when it was merely an application, I noted:

I had another thought about Verisign’s overall patent strategy while reading through this patent application. In 2013, Verisign discussed monetizing its patent portfolio. It has dropped that discussion (at least publicly). It would be a huge risk for Verisign to go after other registries while it works to hold onto its .com contract.

But…once is clears the Cooperative Agreement with the NTIA, one option would be to sell its portfolio to a group that grants a license back to it. That way Verisign can continue operating, get a profit from selling the patents, and be arm’s-length from any actions the buyer takes.

Verisign has now amended the Cooperative Agreement with the NTIA but is still working with ICANN to try to incorporate the .com price increase. It obviously won’t do anything drastic until then. Once it gets its way with price increases, it will have to consider how bold it wants to be. Does it want to hold out on rocking the boat as it pushes for price caps to eventually be eliminated?