Online marketing publisher sues a competitor over use of “MarTech.” 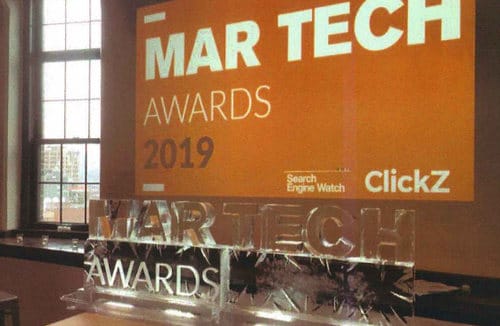 Third Door Media says ClickZ’s use of Mar Tech infringes its trademark. This photo is from ClickZ’s website and was included in a lawsuit over the matter.

Third Door Media, the publisher of Search Engine Land and producer of marketing conferences such as SMX, has sued rival publisher ClickZ for trademark infringement. ClickZ is part of the same company that owns Search Engine Watch.

The dispute stems from the use of “MarTech.” Third Door has a website called MarTech Today and produces a conference called MarTech. It also has a trademark on the term.

In the lawsuit (pdf), Third Door alleges that ClickZ produced an event in March called Marketing Technology Awards. At the event, it shortened the name to Mar Tech. (The photo above, from the ClickZ website and included as an exhibit in the lawsuit, shows the use of Mar Tech at the event).

I imagine that MarTech is a difficult trademark to defend, given that AdTech is a popular term for online advertising technology. Third Door says that it has already convinced AdAge and other companies to cease using the mark.