ICANN has a duty to cap renewal prices of domain names. 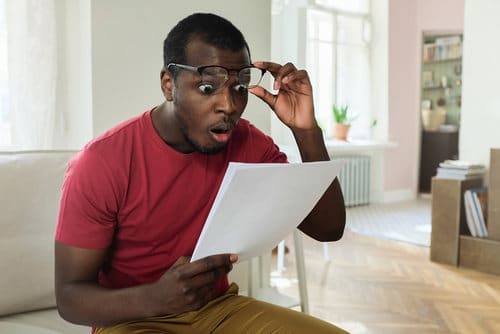 This might be your reaction to your renewal notice in a couple of years.

Today is the last day to comment on ICANN’s proposal to lift price caps on .org and .info domain names.

If approved, the registries that run .org and .info will be able to raise prices as high as they want on both new registrations and renewals as long as they give notice to the registrars. ICANN has proposed removing price caps on other domains as well.

This is a controversial topic for both domain investors and end users. It’s important to think about the dynamics of domain registration to understand the impact this will have.

Market power at the time of registration

It is technically true that there are a lot of choices when it comes to choosing a domain name. If I want to register example.com, I can choose to register a longer .com, opt for a .net or .info domain, a ccTLD or choose from hundreds of new top level domains such as example .xyz.

But let’s face it, people usually want .com. It has extraordinary market power.

Back in 2008, the U.S. Department of Justice Antitrust Division explained (pdf) this in a letter to ICANN regarding new top level domain names. It stated:

“Our investigation of the proposed .com agreement generated several findings that bear on the likely effect of creating new gTLDs. First, we found that VeriSign possesses significant market power as the operator of the .com registry because many registrants do not perceive .com and other gTLDs (such as .biz and .info) and country code TLDs (“ccTLDS,” such as .uk and .de) to be substitutes…

Even with the introduction of hundreds of new top level domains since this letter was written, they have barely chipped away at .com’s market power.

Do other TLDs have market power? I’d argue .org does. Charities and non-profits often think of .org first instead of .com. The antitrust department noted:

In order of power in the gTLD market, I’d argue that .com is highest and .org is second highest. ccTLDs also have market power in some countries.

The presence of market power for initial registrations suggests that prices for some top level domains should be restricted. A non-profit is unlikely to choose .charity over .org unless it is unable to acquire the .org domain. It will usually choose an alternate, longer .org domain before choosing something else. This might not be true in twenty years but it is true in 2019.

For top level domains that don’t have market power and are easy substitutes for each other, controlling initial registration prices is not as important. That’s part of the reason people are complaining more about .org price caps than .info.

High switching costs and market power at the time of renewal

Domain names have immense switching costs. Companies that switch from one domain name to another often spend months planning the move. Some spend years. Some spend hundreds of thousands of dollars.

There are two reasons the switching costs are high.

First is search engines. Google is the lifeblood of many website’s traffic. Even the best-planned domain name transition can have serious traffic (and thus monetary) impacts. When HomeAdvisor switched its domain from ServiceMagic.com it saw a marked drop in traffic and revenue. On its conference call after switching domains, the company stated:

HomeAdvisor domestic revenue was negatively impacted by a 20% decrease in accepted service requests due primarily to the domain name change.

20% from a domain name change!

It took the company a while to regain the search rankings it had before.

Even companies that create and manage websites for a living have to expend significant resources to change domain names.

It can be done but it’s very difficult.

The second reason for high switching costs is email. Companies often have thousands of email addresses tied to their domain name. These email addresses are then tied to many online accounts. Switching domain names means updating all the mailboxes technically and all the accounts associated with them. It means emailing all customers and telling them about the new addresses. It undoubtedly means missing some important emails when the switch happens.

I have an acquaintance who was offered over $200,000 for a domain name he registered in 1997. He declined because he and his family have email addresses tied to the domain. It would mean changing hundreds of account registrations at websites and countless hours of work.

It’s one thing to switch email addresses if the company retains its prior domain name and can forward email to the new one. But if a company has to relinquish an old domain name due to renewal costs, it will miss out on this email forwarding and probably miss important messages.

These high switching costs make domain owners hostages to the registries that operate their domains. They simply have to pay whatever they are charged. The cost to switch is too much.

For this reason, renewal costs must be capped.

How domain registration and renewal costs should be managed

For this reason, ICANN should consider capping initial registry fees for top level domains that have some level of market power, such as .com and .org.

It should limit prices on all domains at the time of renewal.

The organization has stated that registrants have some protection because they can renew domains for up to ten years at current prices before price hikes take effect.

There are two problems with this.

Second, and most importantly, this just kicks the can down the road. What does a company do ten years from now when it has to pay the new rates.