No matter what Verisign charges them, registrar profits on .com are limited by competition.

Where does that extra money go? As the sole wholesaler of .com domain names, every penny that Verisign raises the price of .com domain names goes to its bottom line. Domain registrars do their best to pass the price increase on to consumers, but their margins continue to be held down by the competitive market.

Indeed, while domain registrars can charge whatever they want for .com, market forces prevent them from charging much over the wholesale cost. 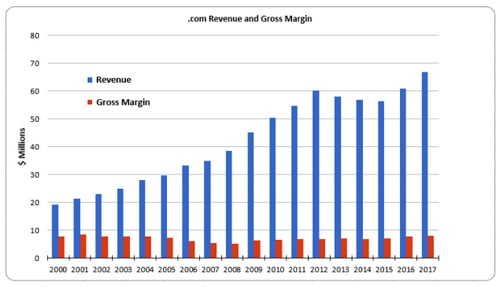 It shows the revenue that Tucows generates each year from .com sales as well as the gross margin. As you can see, it sells more and more .com domains but it makes roughly the same amount of margin ($8 million) each year.

… .com has a strange place for us, and I suspect most registrars. It is still by far the largest top level domain. It is still by far the one that end users want as first priority. It still dominates our discussions with resellers. And over time it has become less and less impactful to our gross margin dollars. The data, going back to the launch of OpenSRS in 2000 speaks volumes. The unit volume of .com sold goes up every year. The amount of money we pay to Verisign goes up commensurately. And the amount of money that the competitive registrar market allows us to generate stays flat. Like the prairies. Amazingly flat over now 18 years. And on a % basis it has gone from us making 40% of the .com revenue generated in 2000, all the way down to 12% in 2018. We make a little under $8 million per year on .com. That was true in both 2000 and 2018. They made roughly $19 million from our .com sales in 2000. In 2017 that number was nearly $67 million. This price increase only exacerbates that trend. And of course we believe that registrars do, by far, the lion’s share of the work to generate that revenue.

While the price of .com has increased from $6.00 to $7.85 over the past 18 years, the biggest impact on profits is competition amongst domain registrars.

Noss is also pointing out that registrars (not Verisign) do the most work to promote .com’s growth.

If .com prices increase in a couple of years, Tucows will have to pass these costs directly to customers. It will probably still generate a gross margin of about $8 million a year from .com but on a bigger revenue base.