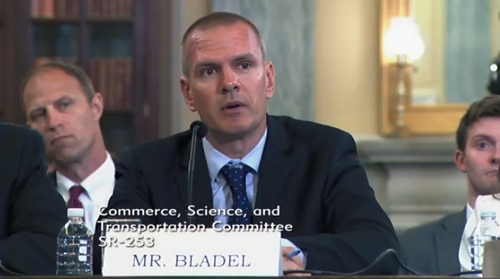 GoDaddy VP of Global Policy James Bladel testifying to the Senate Subcommittee on Communications, Technology, Innovation, and the Internet

GoDaddy Vice President of Global Policy James Bladel was in Washington, D.C. this morning for a Senate hearing “The Internet and Digital Communications: Examining the Impact of Global Internet Governance”.

In his prepared testimony (pdf), Bladel touched on three topics: foreign regulations, GDPR and the Cooperative Agreement between the U.S. government and Verisign when it comes to .com.

On the latter, Bladel urged the government to maintain price caps in the Cooperative Agreement. He also urged them to eventually put the .com contract out to competitive bid.

Bladel was questioned by Ted Cruz about the first amendment and what role companies like GoDaddy should have in being the arbiters of free speech. It seemed like he might be alluding to GoDaddy kicking out domains like DailyStormer.com. Bladel responded that GoDaddy does not want the role of determining what is free speech, but does enforce its Terms of Service against illegal activity and speech that rises to a level of promoting violence.