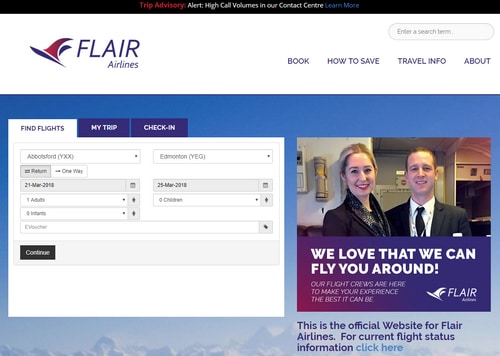 Flair Airlines alleges that former contracts are holding its domain names hostage, forcing it to change its website address.

A small Canadian airline says that former contractors are holding its two main domain name hostage, causing the company to lose substantial sales. It’s yet another example of why a company must be the registered owner of its domain names rather than letting a third party be the registrant.

In a lawsuit (pdf) filed in Illinois yesterday, Flair Airlines Ltd claims that former customer service and website services contractors were supposed to register FlairAirlines.com and FlairAirlines.ca in the airline’s name.

When the relationship soured and was terminated, the airline found out that the domains were not in its control. The airline could not get control of the domains or make changes to them at GoDaddy because it wasn’t the official registrant.

In its suit, the airline says that it was forced to switch its domain name to FlairAir.ca. On the day of the switch the company’s sales went from $64k to $29k, it says. It had to spend money for Google Adwords to direct customers to the “correct” website.

Regardless of who is at fault for the termination of the business relationship, this is just another example of why a company must be the registrant of its domain names. It should also have the master registrar controls for the domain name.