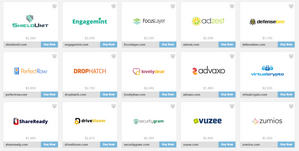 According to the UDRP decision, In June 2016 BrandBucket let its U.S. trademark application lapse. Despite the lapse, it certainly still had common law rights to the mark.

A few months later the respondent registered BrandBucket.org. He reached out to BrandBucket the day after registering the domain to see if they wanted to buy the domain. Over the next couple of weeks, he filed trademark applications in the U.S and Norway for BrandBucket.

Shortly thereafter, BrandBucket became aware of the respondent’s trademark registration and website, which it said was essentially a copy of its websites. It contacted the respondent who took the site down. He wrote:

Regarding your expired trade mark, we have applied for trademark as there is a free and open process, this doesn’t mean we take advantage. Regards to your request, based on a professional respect, we have shut down the website at this stage. Same based on a professional respect, we have offer the domain for you a while ago. One thing we should have clear, as we don’t operate in the same territory or market. However, all things been said, we do respect and appreciate your business, and it may be that we could collaborate with together in the future.

As you can imagine, BrandBucket had not interested in collaborating.