The websites for two major publicly traded Chinese travel sites went down today as a result of their domain names being place in “ClientHold” status at the registrar.

Web.com spokesperson John Herbkersman told Domain Name Wire, “This was a Whois issue and has been resolved with both sites.”

The clienthold status is often used for payment issues, but both ctrip.com and elong.com have a long time until they expire. A clienthold can also be placed for legal reasons.

As of around 12pm EST, it appears the clienthold on ctrip.com was removed. Here’s the whois record from DomainTools when the hold was in place:

As of 12pm EST, eLong.com’s website was still down. [Update: it’s back up.] Here’s the whois record from Network Solutions: 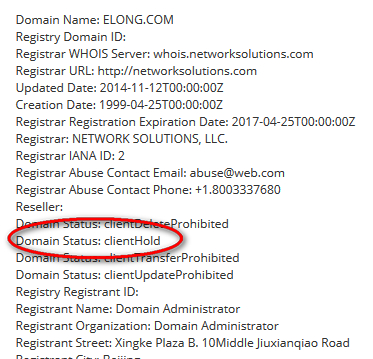