.Com continues to grow, just at a slower pace.

There are many ways to measure .com.

Each of these numbers is measured differently. For example, some include domains in pending delete, while others don’t. The quarterly number combines .com with .net.

The key to measuring .com over time is to use consistent numbers. To compare apples to apples.

In this post I’ll provide data about .com’s growth over the past five years using data from the monthly reports Verisign submits to ICANN.

(These reports are made public three months after the the end of the month, which means there’s no data from Q2 2014. This is the period in which Verisign reported a sharp drop in “net adds” of domain names using the third measure listed above. Although new registrations were healthy, the renewal rate dropped.) 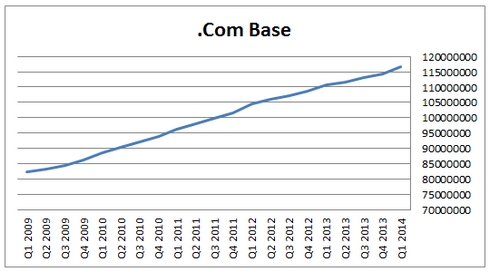 The number of registered .com domain names in the monthly reports has increased by at least 1 million each quarter during this period, with a median of about 1.7 million net adds.

You’ll note that the first quarter of each year is generally strongest. There’s seasonality in the domain name registration business, both natural and artificial (due to marketing programs).

Because of this seasonality, comparing quarter-over-quarter growth isn’t the best way to look at growth in .com. A year-over-year comparison is better: 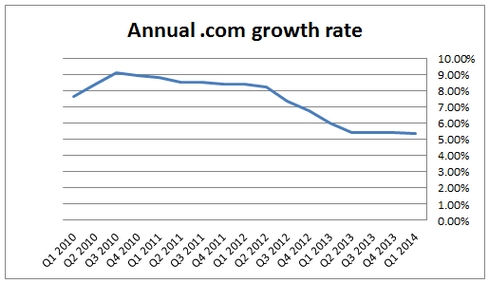 The increase in the .com base is growing at a slower rate than before.

This will happen, of course, regardless of renewal rates and new registrations. As the existing base gets bigger, the percentage gain by the same gross gain is smaller.

The annual net adds have certainly been slipping, though. Over the past four quarters they’ve been in the 5.0-6.0 million range; in prior years they’ve been between 6.0-8.0 million.