Online coffee seller fails to snag CoffeeDirect.com through a UDRP for a second time. 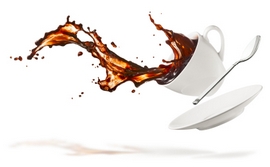 Coffee Bean Direct’s two attempts to get CoffeeDirect.com through UDRP have been a train wreck. Or maybe a hot coffee spill?

Coffee Bean Direct LLC, an online coffee seller, has lost its second UDRP against the domain name CoffeeDirect.com. In both cases the owner of CoffeeDirect.com didn’t bother to respond but still won the case.

If you look at the facts, this won’t come as a surprise.

The owner of CoffeeDirect.com actually sold coffee on the site from the late 1990s until 2006, when it threw in the towel. With full knowledge that CoffeeDirect.com was registered, Coffee Bean Direct (which operates at CoffeeBeanDirect.com) decided it wanted to use the shorter Coffee Direct name and domain name.

So Coffee Bean Direct tried to acquire the domain. When the price wasn’t to its liking, it filed a UDRP with World Intellectual Property Forum in 2010. It lost the case, as it was clear that the domain name was not registered in bad faith. Not only did the registrant register the domain many years before Coffee Bean Direct started using the brand, but it actually sold coffee at the domain!

In general, CoffeeBeanDirect.com tried to push the “renewed in bad faith” argument that has become a popular last ditch effort for companies trying to reverse hijack a domain name.

Here are some of its arguments:

When no agreement was reached between the parties concerning the disputed name and in light of the Respondent’s abandonment of its mark “COFFEE DIRECT”, the Complainant formulated plans to adopt and use its COFFEE DIRECT mark in connection with its ongoing coffee roasting and sales business. To that end, on June 17, 2008 the Complainant filed an application to register the mark COFFEE DIRECT in the US Patent and Trademark Office (USPTO).

Why on earth would you adopt a brand when you know full well you aren’t able to acquire the domain for a price you’re willing to pay? Is it because you think you’ll be able to claim trademark rights at a later date to get the domain? Or maybe…

After issuance of the WIPO Decision D2010-0162, confirming that the Respondent no longer had legal rights in the Domain Name, [Coffee Bean Direct] fully expected that the Respondent, Mr. Pope would allow his Domain Name registration to expire in due course in June 2013. After all, there was no legitimate business logic to renew registration if it could not be legitimately used by the Respondent. Therefore upon the expiration of the Respondent’s registration, CBD planned to register and adopt the Domain Name for its Web portal, consistent with its existing use of the COFFEE DIRECT marks on packaging, newsletters, social media and its existing “coffeebeandirect.com” Web portal home page display. . In early 2013 CBD commenced monitoring the Domain Name Registrar’s WHOIS data for expiration and purchase availability notices.

Hmm. Why would you hold on to a valuable domain you used to use for your business rather than let it expire? Maybe because it’s valuable.

Coffee Bean Direct then argued that the domain was “renewed in bad faith”:

On April 4, 2013 — three years after the WIPO Decision 2010-0162,–the Respondent, fully aware of the Complainant’s continuing exclusive trademark rights and its inability in light of those rights to utilize the mark Coffee Direct without infringing those rights, nevertheless, and in spite of that knowledge, intentionally renewed his name registration for another 3 years, as reflected in the WHOIS. The Respondent continues to hold the Domain Name passively since its re-registration.

Coffee Bean Direct decided to threaten the owner of CoffeeDirect, Claude Pope, as explained in the UDRP filing:

Shortly after the Respondent’s April 4, 2013 Domain Name renewal [Coffee Bean Direct] sent a registered mail letter to Mr. Pope reminding him of CBD’s trademark rights and his inability to use his Domain Name in view of those rights. [Coffee Bean Direct] said that under these new circumstances Mr. Pope’s 2013 renewal was done in bad faith. However, as a gesture of good will, to avoid the expense and inconvenience of further domain name transfer proceedings, [Coffee Bean Direct] offered Mr. Pope a payment of $2500 to cover any reasonable expenses incurred by him to transfer the Domain Name to CBD.

The Czech Arbitration Court decided to consider the facts even though this may have qualified as a “refiled” case, which generally won’t be heard. It decided along the same lines as the first panel, which determined that the domain name was not registered in bad faith.