Satisfaction with the Internet Corporation for Assigned Names and Numbers skyrockets.

ICANN is the domain industry’s favorite punching bag. But people want to punch it less this year.

Every year on the Domain Name Wire survey I ask people to rate their satisfaction with ICANN. They can select “Good”, “Acceptable”, or “Poor”.

And every year save for 2006, more people have rated it poor than good. But that changed this year, as more rated their satisfaction good than ever before: 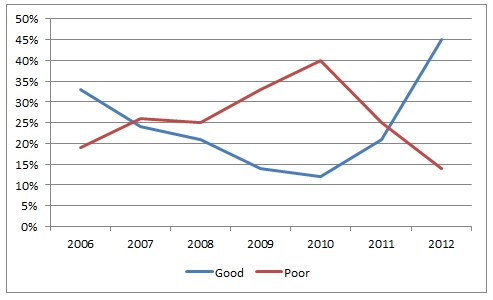 45% of survey respondents rated their satisfaction as good, while 14% said it was poor. If you filter for only people with 500 or more domains, a whopping 64% rate it good and 18% bad.

Why the sudden change of heart? Does it have to do with ICANN finally getting its new TLD program rolling?

Perhaps a little. But I think a bigger underlying cause is the fear of the alternative.

There have been increased calls by governments to transfer the powers of internet governance to a UN-style group. And I think we can all agree that would be a very bad thing.

When faced with the alternative, I think a lot of people take a step back and ask themselves how bad they really think ICANN is. Sure, it has problems. Lots of them. But it sure beats the alternative.