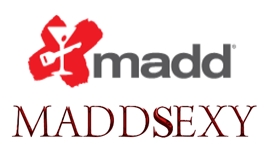 Mothers Against Drunk Driving, known by its acronym MADD, is taking on lingerie company MADDSEXY in a trademark lawsuit (pdf).

Among MADD’s requests is that MADDSEXY cease using its domain name Maddsexy.com.

According to the advocacy group:

Defendants’ promotion of lingerie products, along with their highly sexualized portrayal of women in their promotion of their products, is likely to erode MADD’s credibility and damage MADD’s goodwill and valuable reputation by diluting the MADD Marks, including, but not limited to, the famous MADD mark.

Hmm. I “get it”, but I can also understand how the lingerie company chose to add two d’s to the end of its name for a number of reasons.

And I don’t know that I agree with this:

Defendants’ use of “MADDSEXYâ€ in promoting women’s intimate products so resembles MADD’s distinctive marks used in connection with MADD’s goods and services, which are offered in the same channels of commerce to the same general public, as to be likely to cause confusion, or to cause mistake, or to deceive.

I seriously doubt anyone who buys this lingerie thinks that a portion of the proceeds are going to Mothers Against Drunk Driving.