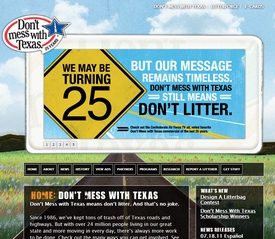 The Texas Department of Transportation has a message for domain name owners: Don’t Mess with Texas.

The organization just won a National Arbitration Forum case over the domain name DontMessWithTexas.com. The owner of the domain name didn’t respond to the dispute. Barring any late legal action by the owner, the domain will be transferred to the state within 10 days.

Don’t Mess With Texas is the state’s iconic slogan created for anti-litter campaigns in the mid-80s. It uses DontMessWithTexas.org for its web site.

The department has been more aggressive about protecting the trademark of late as people have started to disassociate the slogan with the anti-litter campaigns and it has brought on more of a generic meaning. It recently tried to stop the publication of a romance novel of the same name.

Although the department won its domain name disputee, it made a big mistake in how it argued the case (assuming the panelist accurately described it in her decision). The panelist considered 1996 as the registration date for the domain, which predated the federal trademark registration for the slogan. The domain has actually change hands many times since then and the domain registration per generally accepted UDRP guidelines actually occurred after the trademark was registered.