Group wants to get the WeWillRockYou.com domain name. 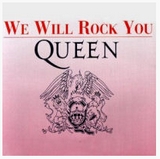 The rock group Queen has filed a case against the owner of WeWillRockYou.com at World Intellectual Property forum, asking an arbitration panel to hand the domain name over.

We Will Rock You is one of Queen’s greatest hits. Combined with We Are the Champions, Queen still gets plenty of play time at sports arenas around the world.

The song later became the name of a musical that still tours the globe to packed houses.

WeWillRockYou.com purports to be a site that lets artists get their work in front of a larger audience. But a couple years ago the site was a one page lander with links to buy tickets to the musical.

The domain name was originally registered in 1997.

The arbitration panel should decide the case within a couple months.