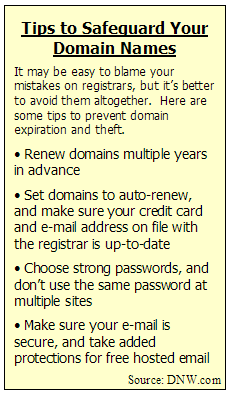 When online backup service CrashPlan.com went down earlier this month, the company was quick to blame its domain name registrar GoDaddy. Code 42 Software, which runs the CrashPlan.com service, tweeted about how GoDaddy “mistakenly removed our root nameserver entry”, “inappropriately took over our DNS”, and did a DNS “hijack”.

What Code 42 Software never tweeted was that it had mistakenly let the domain name expire. The outage was Code 42’s fault, not GoDaddy’s.

None of the previous five e-mails GoDaddy sent to Code 42 Software alerting them to the impending expiration got the company’s attention.

The myth that GoDaddy was to blame then spread across the web. One commenter on an unrelated CNET story wrote that “GoDaddy somehow hosed their domain.” (Code 42 Software did not respond to a request for comment for this story.)

Domain registrars frequently get thrown under the bus when one of their customers makes a mistake. In another case, a registrant of a popular web site had their non-Go Daddy email account compromised, which allowed an attacker to steal their domain name by transferring it away from GoDaddy. The customer publicly blamed GoDaddy, even though the problem was with the customer’s e-mail security.

GoDaddy deals with the brunt of attacks like this, given its massive size and mass market strategy. But other registrars feel the heat, too. Earlier this year fingers were pointed at eNom when several high value domain names were stolen. The real culprit? The customer used a weak password, allowing the thief to access their account.

Companies with popular web sites have a number of added tools they should use to protect against many of the most common domain problems. Moniker and Fabulous offer domain locking tools with added security. GoDaddy offers Protected Registration. Companies should also subscribe to DomainTools’ Registrant Alert to find out about potential theft quickly. The sidebar of this story has other tips for protecting your domain names.