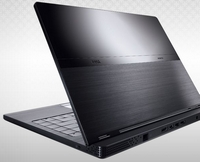 [Update: Dell has purchased Adamo.com.] I track domain name registrations by Dell (NASDAQ: DELL) on a regular basis. The company is no slacker when it comes to registering or requesting transfer of any domain that includes its trademarks. Which is why this story on OneDegree.ca is surprising.

Dell launched its sleek new Adamo laptop but didn’t procure the domain name Adamo.com. Dell is using the domain AdamobyDell.com, but many confused people are typing in Adamo.com. Adamo.com is owned by Tucows (AMEX: TCX) as a last name in its NetIdentity portfolio.

Dell never approached YummyNames although they claim a broker approached us anonymously and got the impression it would be too much money, but no one here has any knowledge of that exchange and, besides, we also offer domain name leases for as little as $750 a month. We subsequently reached out to Dell’s ad agency, Enfatico, when we noticed a traffic spike to the domain dating back to the CES announcement of the laptop in December. We are fans of Dell and want to help them out but they seem to think even $750 is too big an investment for a global product launch. We are all stunned that Dell, of all companies, doesn’t get the value of a good domain name!”

$750 a month? Dell’s customers will ultimately find its web site (especially since Tucows has added a link to Adamo.com), but this seems like small price to pay to avoid consumer confusion.