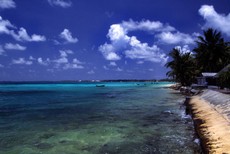 Sure is pretty. Until the water rises.

This headline isn’t a joke. Here’s how global warming and subsequent rising ocean waters could doom a domain name extension.

Last night I read an article in The Economist about the Maldives, an island nation planning for the day it will be below sea level. The article also mentioned Tuvalu, an even smaller island nation of just over 10,000 inhabitants. At its highest, Tuvalu is just 5 meters above sea level. If waters rise, Tuvalu will become history. Its government is planning for that day, too.

Does Tuvalu sound familiar? Its country code domain name is .TV. .TV has since been commercialized by Verisign (NASDAQ: VRSN) and promoted in a deal with DemandMedia. By handing over control of the domain to Verisign Tuvalu gets a nice cut of the profits.

If Tuvalu ceases to exist, current ICANN policy dictates that the .tv domain name will be phased out. Kim Davies, Manager of Root Zone Services for Internet Assigned Numbers Authority, wrote in an email to Domain Name Wire:

The simple answer is if a country ceases to exist, under existing policy the domain will need to be retired. ICANN will permit a reasonable transition period so the affected parties can transition to other domains. In the most recent case, .YU (replaced with .RS and .ME), there was a 3 year transition period assigned by the ICANN Board.

To be sure, unless something catastrophic happens it will be long time before Tuvalu is completely under water even by Al Gore’s estimations.

A more likely scenario is that a country undergoes political strife, disbands, or renames. That’s how the repurposed .me domain name came to be, as referenced in Davies’ email. .Me is the country code for Montenegro, which was formerly part of Yugoslavia. The country code domain name for Yugoslavia, .yu, is being phased out.

In many parts of the world countries disappearing or changing names happens all the time. I wouldn’t be surprised if ICANN was lobbied to change its policy of following the ISO 3166-1 standard for country codes if one of these “commercialized” ccTLDs such as .tv and .me was scheduled for extinction. But you should be aware of the risk.