It’s hot down here in Texas. 100 degrees and humid. So last week my family packed up the bags and flew to Seattle for a 5 day vacation. The average high temperature in Seattle in August is 75 degrees, so it was a perfect location.

Except for one thing: we chose the very week to arrive that Seattle was experiencing record heat in the 90s. Sure, 90 degrees and dry sounds better than 100 and humid, until you realize that Seattle doesn’t believe in air conditioning.

On our vacation I saw a number of domain names, some good and some bad. The best was Zoo.org, the domain for the Woodland Park Zoo. We knew we were going to go to the zoo while we were in town, especially because it had a special exhibit of flamingos (my two your old daughter is a big fan of the pink birds). I forgot what time it opened, but it was easy to remember the domain name for the zoo so I could look it up.

It may seem strange that a .org domain would be a sign of an organization that understands domain names, but realize that the zoo isn’t going after type-in traffic. It’s going after something that’s easy to remember and easy to spell. An alternative would be WoodlandParkZoo.com, which is long and difficult to remember since many people think of it as the Seattle Zoo.

I also saw a truly horrible domain name, but you should visit the web site anyway. eSimplytheBest.net is the domain name for a dried fruit stand at the Pike Place Market. It’s a bad domain, but the fruit is really good. I can vouch for the dried blueberries. And we should at least give them props for printing their domain on each bag of fruit.

Update: David Castello commented that he was in Seattle just a few days before me and noticed one of the fish markets at Pike Place used the domain name “FreshSeafood.com”. While uploading photos from the trip tonight, I noticed that I snapped a picture of my daughter in front of their sign with the domain on it: 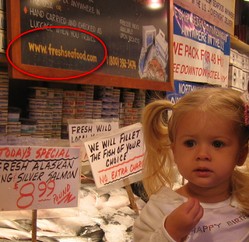