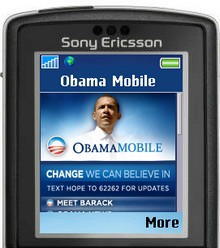 United States Presidential candidate Barack Obama is leveraging the mobile web to get his message out. His campaign is using ObamaMobile.mobi. And unlike most popular .mobi domain names, it actually resolves to a .mobi domain rather than just forwarding to a mobile version of a .com we site.

The site does a good job providing interactivity despite mobile limitations. For example, it provides a text response number and lets users receive a whitepaper about Obama’s mobile plan via e-mail (since downloading it on the phone wouldn’t work well).

The only unfortunate news in this for .mobi fans is that this is a long and poor domain name. Obama.mobi forwards to an Information.com page. Even worse, ObamaMobile.com is owned by a New York firm. ObamaMobile.com was registered prior to the Barack Obama campaign picking up its domain name.