There might be a connection to China…or just the backlinks.

I am still puzzled by the domain SJZHDC .com selling in a Godaddy auction recently for $6,500.

Generally speaking, six letters are too long to act as an acronym and don’t carry much value. However, SJZHDC .com appears to be an exception. It surprisingly attracted 333 bids in the auction. So, what is the mystery behind this domain?

Wayback Machine is my Sherlock Holmes that can tell me the past life of a domain. According to it, SJZHDC .com was first registered in 2011 but not used. Later, it was dropped but picked up again in 2013 and developed into a website called Zhou Gong Jie Mong (周公解夢), which operated until January this year. Because the website’s language is traditional (not simplified) Chinese, it was probably meant for use outside mainland China — such as Hong Kong or Taiwan.

Zhou Gong Jie Mong (周公解梦) literally means “Zhou Gong Interpretation of Dreams”. Zhou Gong, the Duke of Zhou, was a member of the royal family of the Zhou Dynasty (1050 to 771 BC). He is also known as the “God of Dreams” for his exceptional ability to interpret dreams. Legend has it that he wrote the book “The Interpretation of Dreams by the Duke of Zhou” which is still used today to interpret dreams.

On the SJZHDC .com site, you can enter keywords about your dream or simply select a specific one from the large collection of dreams to look for interpretation.

The contents of SJZHDC .com are useful, but the website’s title (brand) does not match the name of the domain. The correct one should have been ZGJM .com (which is currently parked). A good example can be found in ZGJM .org, which is both brand-matching and filled with content very similar to SJZHDC .com.

For comparison, SJZHDC .cn was registered only in March this year and has a landing page that may be related to the Galaxy Macau hotel in Macau. SJZHDC .com.cn is still available for registration.

I did a Baidu search on the term “SJZHDC” and my impression is that SJZ is associated with Shi Jia Zhuang (石家庄), a city and capital of the Hebei Province, and HDC with High Definition Console games. However, no other evidence has been found to confirm the meaning of “SJZHDC”.

After all these efforts, what have I found? Not much, except that SJZHDC .com has 13 million backlinks according to ahrefs.com. Maybe the new owner paid 4 figures for the backlinks of the domain.

This shows how versatile a great brandable domain is. 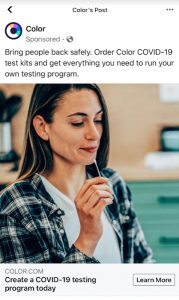 Once used for a photo sharing app, Color.com is now home to a health tech startup. Image from a Facebook ad.

I was scrolling through Facebook today when I came across a familiar domain name: color.com.

GoDaddy brokered the sale of color.com for $350,000 in 2011. A photo-sharing app company with $41 million in funding bought the domain to help promote the app. Unfortunately, the business didn’t work out.

But great brandable domains can be used for just about any type of business, and color.com certainly fits that category.

The new owner is a distributed healthcare and clinical testing company called Color. It has raised $278 million in funding with the latest round valuing the company at $1.5 billion.

Color was founded in 2015 and appears to have acquired the domain name around that time.

Some thoughts about the state of crypto markets and the impact on domain name values. 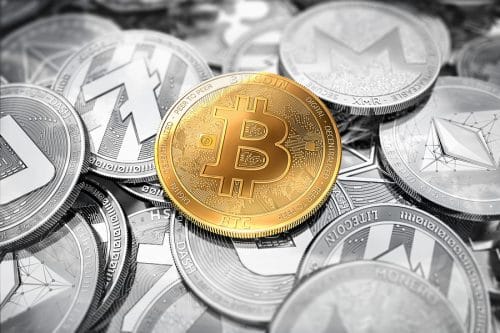 The price of bitcoin fell below $30,000 this morning, making it down 55% since its high in April. Other cryptocurrencies are faring even worse. Ether is down 60% from its all-time high. Of course, both of these cryptocurrencies are still up from where they started the year.

This is all to say that the current market for cryptocurrencies is highly erratic. Cryptocurrencies are not currently a store of value. They should not be used for corporate treasury. They are expensive to transact in and often built on inefficient systems. And people like Elon Musk can move the market on a whim.

Elon Musk is just one of the many hype men for crypto. It’s funny how crypto (and now NFT) works. People buy in, and then each owner becomes a hype man, pushing it higher.

In a nutshell, a deflating asset bubble in crypto probably won’t be good for domain name values.

There are some other parallels. People who have bought into .com are hype men (and women) for .com. The difference, in my mind, is that there truly is a difference between domain extensions in terms of value and use. Is bitcoin really more usable than Ether? It’s probably the opposite.

On a final note, kudos to my colleagues who made a lot of money selling apes lately, even while they’re priced in a falling currency. But I long for the day when my twitter stream wasn’t filled with pictures of apes.

How upgrading to a shorter and better domain helped Voices.com.

There are many benefits to companies that use great domain names. On today’s show, Voices.com founder and CEO David Ciccarelli discusses why his company upgraded its domain name and the benefits it got from the change. You’ll also hear how he negotiated to buy the domain name.

Kassey Lee examines the growth of internet users and consumers in China.

Many companies buy a domain to operate a digital store to sell products or services to consumers. These stores need consumers. The more consumers you have and the more affluent they are, the more demand for domains you can expect in the long run. Therefore, it’s worthwhile to look at the digital consumers in China to see how the market will grow.

Below is a chart of the growth of internet users in China over the last 20 years. You can see a very healthy pattern.

In 2020, China’s internet users grew by 9.4% to 989 million. This represents a penetration rate of only 70%. This means they will continue to grow before they are close to the 1.41 billion population in China.

However, the number alone is not sufficient. You also want to see that the internet users buy products or services. In 2020, 79% or 782 million of the users bought goods or services from the internet. In other words, there are 782 million digital consumers in China.

To better understand the magnitude, compare the number against Japan. The number of China’s digital consumers is more than 6 times the entire population of Japan. This is massive!

In conclusion, the long-term prospect of demand for domains is excellent because China has a very large pool of digital consumers who are affluent and want to buy products or services in the digital economy.