How to avoid bad WordPress plugins.

This week on the DNW podcast meet Mika Epstein, a WordPress engineer at DreamHost. She explains what to look for in WordPress plugins to make sure you aren’t opening up a backdoor to your website. We also hear predictions from Natasa Djukanovic and Braden Pollock.

Subscribe via iTunes to listen to the Domain Name Wire podcast on your iPhone or iPad, view on Google Play Music, or click play above or download to begin listening. (Listen to previous podcasts here.)

Here are the types of companies pitching to webhosts. 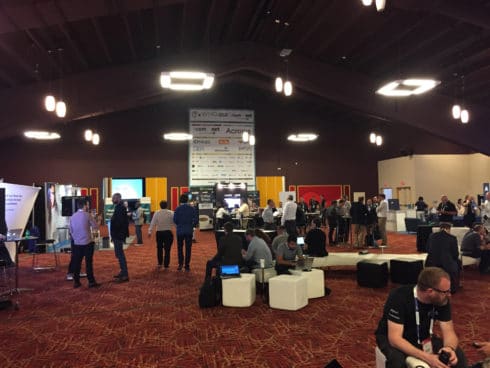 The show floor at WHD.usa.

I’m writing this from a familiar place for the domain industry: the Tropicana Hotel in Las Vegas. I’m surrounded by the exhibit floor at WHD.usa, a web hosting industry conference put on by the same group that now runs NamesCon (which will be in the same hotel in January).

The majority of companies sponsoring the event fall into three buckets:

Website builders – These companies, including Duda and CM4all, offer website builders for webhosts. Domain registrars and hosts need an easy way for their customers to create websites and become sticky customers. Installing and creating a WordPress site is too technical for many users, and that’s where these companies step in. They offer white label or branded website builders that hosts/registrars offer to their customers. Most of these use a proprietary building platform, but Boldgrid is an example of one that makes it easy to start a WordPress site.

Domain reseller systems – OpenSRS and Enom have a co-branded booth this time around as they are no longer competing with each other after Tucows acquired Enom. InterNetX and Ascio also have booths. .Com registry Verisign is the headline sponsor.

Backup and security – This is a big area. There are spam filtering companies, backup protection, security systems and more. Some of these companies sell directly to end users and others offer their services to hosting companies that, in turn, offer them to their hosting customers.

Of course, these are just the sponsors. Attendees include companies all around the hosting ecosystem including the hosts themselves.

How one domain investor figured out an ideal way to review web hosts.

Kevin Ohashi lives the “digital nomad” life. We got connected through his activities in the domain investing world, but today we discuss his venture Review Signal, a site that uses sentiment analysis of tweets to figure out which web hosts are best. We discuss how the idea came to be and how much money the site makes. Also: Drop catch shakeup, McDonald’s domain change, promoting domain investing and more on Rightside/Donuts tie-up.

A couple weeks ago I changed web hosts to GoDaddy.com. Several people have asked why I decided to change hosts in the first place and why I chose GoDaddy.

Why I changed hosts

When I started Domain Name Wire I hosted it with the same host I’d been using for my other sites for 5 years. I’m not going to mention the host by name because they’ve really been pretty good to me for the better part of a decade. It’s a small company and I still host a number of sites with them.

For the most part my host grew with the site. When traffic levels increased I moved to a dedicated server. And it worked, most of the time.

But that changed over the past year. More and more often, whenever I’d get a spike in traffic my site would slow to a crawl or stop altogether. It’s painful to miss out on traffic like that.

Worse, the company didn’t offer any phone support. Its chat support was limited as well and only offered for part of the day. That’s to be expected with an inexpensive host, but remember that I was on a dedicated server.

I put off moving Domain Name Wire over the years because I knew it would be a pain. But after my most recent site outage I knew it was time to make a move.

2. Redundancy/cloud solution in case one server had a problem

3. Cost was not a concern – I’m willing to pay what it takes for peace of mind.

I was originally leaning toward WPEngine. It’s based here in Austin and has financial backing from the creators of WordPress. All they do is host WordPress sites. The monthly fee for my site would be $99, which isn’t bad. They also have a number of built in mechanisms for speeding up WordPress sites. One thing that’s missing is 24/7 phone support.

GoDaddy wasn’t on my original list. But the more I thought about it the more it made sense. They’re big and have a good infrastructure. They call their shared plans 4GH, which basically means your site is replicated across multiple servers in case one goes down. (The idea of hosting a site like this on a dedicated server doesn’t make sense any more.) They have 24/7 support. I also have a dedicated account manager for my domains. So if something goes wrong, I know I can reach someone who will help.

Honestly, the only reason I found to not go with GoDaddy was price. It’s too low. I generally wouldn’t feel comfortable trusting my site to a $10/month hosting plan.

I’m going to be honest: switching hosts is a big pain. There are some solutions out there that apparently make porting WordPress easier. But we’re talking about over 5,000 posts, 3,500 files (images, pdfs, etc), and lots of database tables. It’s not something to do except out of necessity.

I use WordPress’s own solution for backups, VaultPress, which made it a little be easier. Unfortunately VaultPress does not yet help you port from one host to another (they say they’re working on it), but I was able to transfer the site using a VaultPress backup.

Then there’s the nameserver switch and the time it takes that to resolve across the internet. That resulted in about 24 hours of “dead” time in which the site loaded fine but I didn’t want to post.

I’m not going to pass judgment on GoDaddy hosting after just a couple weeks. But so far, so good. The site loads faster than on my previous host, and that’s without making any changes. And I know that if I do need support, it will be easy to contact someone at the company.

The web hosting industry is descending on Austin, Texas next month for HostingCon. The event will take place at the Austin Convention Center July 19-21. Tickets are still available, starting at $489 for the entire three day conference.

I’ve identified a number of domain name related companies that will be in attendance and/or exhibiting:

So why would domain companies come to a hosting show? Two main reasons:

1. Most domain name registrars make a good chunk of their revenue from web hosting add-on sales.

2. Web hosts are a good channel for selling domain registrations.

dotMobi will no doubt push for web hosts to offer .mobi domains to their customers and provide mobile web site building applications. VeriSign and Afilias will likely push their security and DNS solutions.

HostingCon is organized by iNET Interactive.

If you’re coming to town for the event, drop me a line.