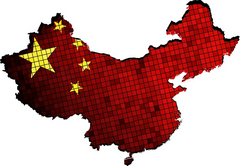 If you invest in the Chinese domain market, you need to know CNNIC (China Internet Network Information Center) because it publishes a national survey report twice a year on China’s internet landscape. The latest report — the 40th — was published in July. You can download it in Chinese here.

According to the report, China has 751 million internet users. This represents only 54% of the Chinese population so there is a lot of room for growth. Compare this number with the 323 million population of the entire USA and you can appreciate the sheer size and potential of the Chinese market. This number, coupled with the continued increase in internet-related products and services, means there will be an ever expanding internet economy, which in turn will create more companies and therefore more demand for domain names.

There are now 5 million websites, growing mostly at double digits over the last 6 years. This number is dwarfed by the estimated 77 million companies in China. This large gap may be due to companies not being online or running their business from ecommerce sites such as JD.com, etc. Eventually, these companies will want to move to their own address (domain name) to gain complete control of their business. Therefore, high demand for domain names can be expected to continue.

The report shows that 96% of the internet users go online via their mobile phone. This has significance for domain investors. Whatever you do for the Chinese market, think mobile. Make sure, for example, that the landing page of your domain name for sale is mobile ready. Also, 92% of the internet users use a messaging app as their communication tool, with Wechat and QQ being mentioned as the top ones. If you want to communicate with Chinese buyers, a Chinese messaging app may be your best choice rather than email which is popular in western countries. END_OF_DOCUMENT_TOKEN_TO_BE_REPLACED