Bloomberg publishes a story about Nick Lim, who sold BitMitigate to Epik. 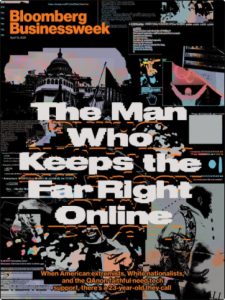 Bloomberg has published a profile of Nick Lim, who sold his company BitMitigate to Epik in 2019.

Lim has since left Epik but remains a shareholder. He now spends his time helping sites favored by White supremacists and QAnon followers stay online.

It’s a fascinating story about the 23-year-old who says he is motivated by free speech. Authors William Turton and Joshua Brustein dig into Lim’s background, finding some contradictions in his story.

The story also discusses Epik and Rob Monster. Bloomberg discusses how the company provides services to extremist sites and provides this nugget:

In October, Bloomberg Businessweek emailed Monster, requesting an interview to discuss Epik’s political philosophy and its relationship with Lim. [Rob] Davis, the Epik executive, sent a nine-page response arguing that Epik had been demonized unfairly and had done a great job of combating extremism. Davis accused the news media of trying to destroy the lives of Epik employees and said the interview request itself was part of an attempt to manipulate the 2020 presidential election. “The long and short of it,” he wrote, “is that we don’t give interviews to traitors of our country that participate in attempted coups sponsored by offshore money.” He cc’d close to 100 other recipients, including the Republican chair of the Federal Communications Commission, the antitrust division of the Federal Trade Commission, and Fox News host Sean Hannity.

This will sound familiar to anyone who has received an email from Davis. When PayPal dropped Epik, Davis wrote an open letter mentioning Hollywood pedophiles and Hunter Biden. When GoDaddy terminated its Afternic partnership with Epik, Epik questioned receiving GoDaddy’s letter “two hours after the election was called for Joe Biden.”

And when some domain name investors reacted to an ostensibly racist comment by an Epik representative, Davis sent an email cc’d to the FTC telling people to stop, threatening that he could email 300 million people within 15 seconds.