More consolidation in the domain name industry as Web.com to join with Endurance. 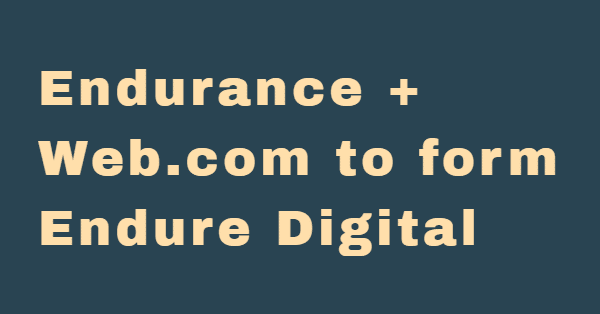 In September, Web.com owner Siris Capital opened a position in Endurance. In November, Clearlake Capital Group announced it was taking Endurance private in a $3 billion deal.

Last month, Clearlake announced that it was making an investment in Web.com. Later in the month, Moody’s rated the debt Clearlake is raising as part of the deal and disclosed significant details; namely that Endurance and Web.com will become one under the Endure Digital umbrella and that the company plans to spin off Constant Contact, its email marketing platform.

After acquiring Endurance, Clearlake will acquire Web.com from Siris at an enterprise value of $2.2 billion. That’s slightly more than what Siris paid to acquire Web.com in 2018.

Siris will then roll its existing equity in Web.com into the combined entity and become an equal share partner in Endure Digital. [Update 1:00 PM PST: The company announced the official name will be Newfold Digital. Newfold Digital will be led by Web CEO and President Sharon Rowlands and Web CFO Christina Clohecy.]

Endurance International Group is a roll-up of hosting and domain companies including BlueHost, HostGator, BuyDomains and Domain.com. Web.com owns Network Solutions, Register.com, NameJet, Snapnames, and a handful of other registrars.