The company offers mobile service, high-speed internet and domain names. It is the world’s second largest domain name registrar, including its OpenSRS and Enom reseller platforms.

Its mobile service is a reseller of large carriers in a relationship known as mobile virtual network operator (MVNO). Think of it kind of like a webhosting company reselling domain names — which is exactly how Tucows’ sells many of its domain names, through hosting companies and other resellers.

Last quarter Tucows noted increased issues with T-Mobile, one of the mobile providers it resells. Drawing another comparison to the domain industry, the challenges it had with T-Mobile remind me a lot of when a domain parking company faces suspect clawbacks from Google.

Tucows is dropping T-Mobile in favor of Verizon. It also has a deal with Sprint that is extended through September 2020.

T-Mobile and Sprint are merging but the merger is delayed as it goes through regulatory challenges. Tucows said it wanted to work with the combined entity but couldn’t wait any longer to resolve the issues. Also, adding Verizon insulates the company from the risks of the pending merger.

Shifting many of its customers from T-Mobile to Verizon will be expensive and adds to woes the company is experiencing with mobile. It expects to spend as much as $15 million transitioning customers over time. About $3 million of that will hit this year.

The company has lowered its 2019 cash EBITDA guidance from $62 million to $52 million to reflect the transition, overall mobile issues and carrier penalties.

It’s a big hit, but the company says it sets the Ting mobile product up for better long term success.

Shares in Tucows dropped 13% to $52.97 yesterday on the news. The stock is up in morning trading today.

High registrations costs — about $100 per year depending on the registrar — are likely cutting down on cybersquatting.

Data show a slight reduction in .com growth rate, but it’s still over 8% per year.

A couple weeks ago Michael Berkens wrote a story about how the base of .com and .net domain registrations was slowing “to a crawl”.

The numbers in Berken’s post didn’t quite make sense to me. The Treffis report refers to .com and .net having a falling market share, which doesn’t seem particularly relevant with the overall namespace continuing to grow.

Curious what the real story is, I decided to dig into the numbers.

The most important thing I discovered is that the numbers some people compare aren’t always apples to apples. What VeriSign reports on its zone file page differ from what’s in its domain industry briefs and investor calls, which also differ from the numbers it reports to ICANN each month. For example, the numbers in the quarterly reports and domain briefs exclude domains in the 5 day add-grace period.

If you compare numbers in the zone file to VeriSign’s other reports, you’ll get the wrong growth rates.

Perhaps the best monthly source of information on .com registrations are the monthly reports VeriSign sends to ICANN. They’re easy to access and the archive goes back as far as you want to go.

So to compare apples to apples, I pulled the end-of-quarter monthly ICANN reports going back to Q1 2009. I looked only at .com.

Here’s what I found: the growth rate of the .com registration base is slowing marginally over the past few years. 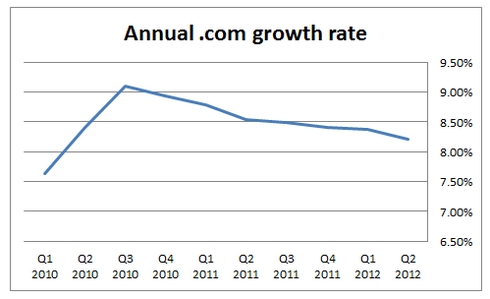 The chart above shows the annual growth rate in the .com base. As you case see, it’s been on a slight downward projectory since Q3 of 2010. It’s never good to go down, but the drop (in growth rate, not total domains registered) has been as little as three basis points from one quarter to the next and no more than 25 basis points. It’s also coming off a nice peak following a hard period due to falling domain parking revenue.

Also keep in mind that the bigger the base gets, the more domains must be added just to maintain the same growth rate. The number of net gains in 2011 exceeded 2010 despite a slower overall growth rate.

It may be helpful to look at the .com base, as reported to ICANN, since Q1 2009 on a chart that begins at zero: 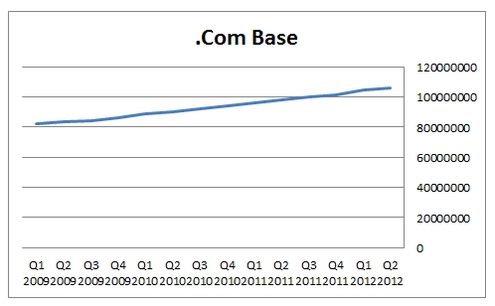 Trying to compare the growth rate in the .com base from quarter to quarter (instead of annually) is a bit challenging. Domain registrations are seasonal. Q1 is consistently a strong quarter for growth.

It’s best to represent this data in a table: 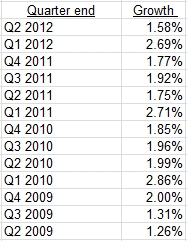 You can still see the slight downward trend in these numbers.

Bottom line: growth in the .com base is slowing, but ever so slightly. And it’s still growing significantly.

The downside to VeriSign’s data submitted to ICANN is that it is posted three months in arrears. Some sites that track .com counts on zone information show that the reduced growth trend is continuing.

Many new TLD supporters think that a proliferation of alternatives to .com will take a bite out of .com’s growth rate. They could be right in the long term. But for now, the registration base of .com continues to grow nicely.

Above.com and related parties have settled a cybersquatting lawsuit filed by Verizon.

The case was filed in February 2011 and Above.com was served during the DOMAINfest Global conference in Santa Monica.

The suit alleged that the defendants used a number of false identities to traffic in trademark-infringing domain names. It alleged the company has registered, used and/or provided Above.com privacy service to at least 183 domains including Verizon’s trademarks, including VerizWireless.com, ActivateVerizon.net, and loginvzw.com.

The defendants initially said that they would take responsibility for the domains they had registered but not for their clients actions. The judge later ruled that Above.com could be liable for actions of its customers if it should have been aware of their activities. The defendants later backtracked and argued that they had not registered any of the allegedly infringing domain names themselves.

Terms of the settlement are not available. However, it “requires performance until June 30, 2014”. Typically a plaintiff in this sort of case wants a financial penalty as well as an agreement to refrain in the future from certain activities regarding the trademark.

The parties are also working a tolling agreement, which means that the statute of limitations will be extended in case the defendants do not follow through with requirements of the settlement agreement.

A trial was scheduled for October 2.

A federal district judge has dealt a blow to Above.com in a lawsuit brought against it by Verizon.

Above.com and the other defendants have accepted responsibility for registering and monetizing typos of Verizon’s brand names, but argued they shouldn’t be responsible for domain names owned by clients of Above.com who use its privacy services and monetization program.

The judge said that Above.com could be liable for actions of its customers if it should have been aware of their activities. Verizon argued that the company was aware of customer use of its services for cybersquatting based on receiving over 100 UDRP notices (pdf).

At one point it looked like the parties were close to settling, but it appears the fight over Above.com’s responsibility for customer domains remains and issue. The case will move forward.