While nTLDStats shows that there are 16,857 names in the .uno zone, this appears to be inflated. 12,302 of these domains are registered at Domainia, which acts as a marketing arm for new top level domains.

.Uno was one of the first top level domain names to get out of the gate in 2014.

Given Radix’s modus operandi, expect the company to offer .uno at a very low price for first year registrations and reasonable pricing thereafter.

This is Radix’s second transaction with the owner of .uno. It previously acquired .Tech in a deal with the same principle.

Site gives .uno domains away for free, but ensures free domain names will be used. 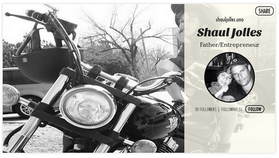 Uno Social Site aggregates your data from various social networks (such as Facebook and Twitter) in one place. It also allows you to add additional media.

Registries have been working hard to get people to register and use their domain names. Use begets use, but getting people to use these new domain names takes time. That’s why I think Uno Social Site, although not completely unique, is a clever idea for a registry.

Think about it: if people use the service, they’ll share it with their friends. After all, it’s social sharing. Friends who visit someone’s Uno Social Site will be exposed to .uno domain names.

By tying the free domain names to a service, it ensures that the domain name will be put to use.

It will be interesting to see if this drives adoption of the .uno domain, which is targeted to Spanish speakers.

Domain name registrar GoDaddy has started using GoDaddy.uno, although perhaps not in the way the .uno registry intends for it to be used: 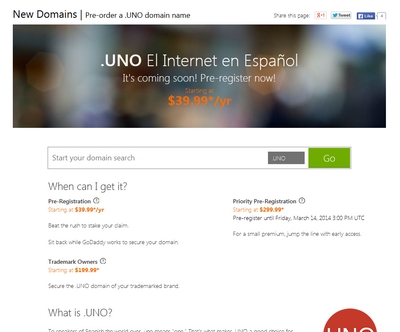 The domain name merely forwards to GoDaddy’s .uno registration page, which is all in English except for .uno’s slogan.

.Uno founder Shaul Jolles told Domain Name Wire last month that his goal is for .uno domain names to lead consumers to a separate Spanish language website for the brand that is using it.

The vision is that a Spanish speaker who knows about GoDaddy.com would go to GoDaddy.uno instead to use the site in his or her own language.

Perhaps forwarding GoDaddy.uno to the .uno registration page makes sense for now, but it might help if a bit more of the page was in Spanish. All in due time, I suppose.

This is the second brand I’m aware of to begin using a .uno domain name. The Trademark Clearinghouse for new top level domain names is forwarding both trademark-clearinghouse.uno and TMCH.uno to Spanish language content on its site.

Jolles, who is behind six top level domain name applications, decided to apply just a few months before the application window closed.

He was visiting with his acquaintance Efraim Gershom at one of Jolles’ co-working spaces (he runs two in Kansas City and one in Chicago). Gershom was looking for office space, but the talk turned to business ideas and, ultimately, new top level domain names.

They figured they were likely to face competition for these domains, and they were right. So they looked for a domain they could get outright.

“Let’s do something completely out of the box that there’s a very good chance no one else will do,” Jolles recounted the discussion.

The pair decided to apply for something Spanish. A quarter of the companies in Jolles’ co-working spaces are Hispanic owned, so he’s familiar with the market.

“I’m very familiar with the lack of attention [Hispanic businesses] are getting,” said Jolles.

They landed on .uno. And indeed, they were the sole applicant for the domain name.

The initial target market for the .uno domain name is companies that sell to the U.S. Spanish-speaking market. Jolles pegs the population at 55 million, and it’s expected to grow to 100 million by 2050.

“Everything that happens in the US with Hispanics happens in South America five years later,” he said. If the domain takes off in the United States, he thinks it will spread elsewhere.

Jolles likes to think of .uno as a service instead of a domain. His idea is that whenever you see a .com domain, you can type in the same secondlevel.uno and get a Spanish-language site.

This would solve a frustration for many Spanish speakers. Although most top brands have a website or section in Spanish, it’s sometimes difficult to find. He hopes to make .uno a universal way to directly navigate to a site’s Spanish version.

One existing example is the new top level domain program’s Trademark Clearinghouse. It is using Trademark-Clearinghouse.uno and TMCH.uno to forward to the Spanish language version of the site.

(You’ll note that Trademark Clearinghouse does not own TMCH.com; owning the equivalent .com is not required to register the .uno domain.)

Jolles would prefer that companies host a completely different site at .uno rather than forwarding to the Spanish-language version on .com, but he’s still excited to have this early use case. Jolles has already set up OfficePort.uno for his co-working spaces as well.

How big is the market? Jolles says he’s “very confident” that they’ll generate a million registrations within the first year.

In order for that to happen, it would seem that the target users will have to have confidence that typing in secondlevel.uno will land on an active website. This was a downfall for .mobi. Sites didn’t adopt it en masse, so people had low confidence of finding the mobile version of a website when they typed in secondlevel.mobi. The domain could also get a boost from Spanish web searches.

Indeed, to hit a million domains that quickly would require that people look at .uno as more than just a domain.

Sunrise for the domain runs through February 7, followed by a 30 day landrush. General availability begins on March 17. The wholesale price for .uno domains is $20. Most registrars are offering it for $35-$39/year.

If Jolles and Gershom pull this off, they’ll be making a whole lot of dinero.