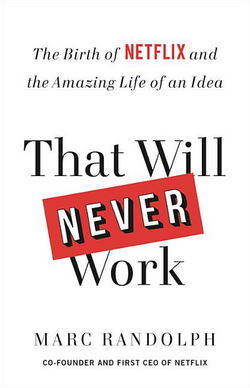 In That Will Never Work, Mark Randolph explains how Netflix came up with its name.

Netflix co-founder Mark Randolph just published a memoir about the company titled That Will Never Work.

As with all startups, Randolph and his team had to come up with a name.

They started with a beta name—one that would work as a placeholder but that they all agreed would not be the final name. That name was Kibble, in part because Randolph already owned the domain name Kibble.com (he still owns it).

As it came time to launch, the team wrestled with which name to go with. Randolph writes:

Picking a name is incredibly difficult. For one thing, you need something catchy, something that rolls off the tongue and is easy to remember. One- or two-syllable words are best…

Some of the names they considered were TakeTwo, Luna, CinemaCenter and NowShowing.

Randolph really liked the name Rent.com, but he didn’t put in on the board for several reasons. One was that it would have cost $40,000 (yes, only $40,000 for Rent.com!) to buy the domain. If you think about it, it would have ended up being a horrible name. While the idea was that customers would rent DVDs, Netflix has changed dramatically in the past two decades. Rent.com wouldn’t make sense anymore.

Netflix might not be the perfect name, but they went with it. Randolph notes:

“It wasn’t perfect. It sounded a little porn-y. But it was the best we could do.”