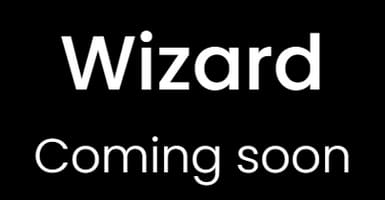 This is Wizard’s home page for now. Expect a lot more coming soon at Wizard.com.

Funding for AI-related startups is at an all-time high. According to information gathered by Statista, AI funding reached around $20 billion in Q2 2021. This year is set to eclipse 2020’s total funding of $36 billion by quite some way, indicating that venture capitalists are keen to back companies advancing our use of artificial intelligence.

A total of $50 million has just been added to the 2021 tally thanks to a Series A funding round announced last week by Wizard Commerce Inc. This startup describes itself as “transforming e-commerce with conversational AI.”

Roughly translated, Wizard is allowing brands and retailers to sell to its customers via text message.

Marc Lore, the former CEO of Walmart US Ecommerce, is among Wizard’s backers.

Lore also owned and operated Jet.com, an e-commerce platform sold to Walmart for $3.3 billion. It seems that Marc Lore is a fan of great domain names for his own ventures and for companies he invests in.

Recently, Lore invested in Tornado, which acquired Tornado.com from Brent Oxley in 2021. Now, Wizard has used some of its $50 million funding round to acquire Wizard.com.

The Wizard.com domain name was previously owned by Telepathy, Inc., a domain investment company owned and operated by Nat Cohen. According to WHOIS history, Wizard.com moved from Telepathy’s possession in December 2020 when it transferred to a GoDaddy account.

Wizard.com remained dormant until recently, when a simple “coming soon” page appeared on the domain.

Crunchbase notes that Wizard was founded on September 1st, 2021, but a TechCrunch article suggests that Wizard isn’t as new as it seems. According to the article, Wizard’s CEO previously ran Stylust, a text-based shopping platform, a concept that sounds similar.

Wizard reportedly acquired Stylust, with the entire Wizard staff aside from some recent C-suite additions being ex-Stylust employees.

Whether this is a brand new company or not, acquiring an ultra-premium domain name such as Wizard.com before officially launching is a strong move that signals the company’s ambitions and intentions.

HVAC company agrees to pay $40,000 after filing cybersquatting complaint in abuse of the UDRP.

It has entered into a settlement agreement (pdf) with the HVAC company. The agreement requires Corporacion Empresarial Altra S.L. to pay Telepathy $40,000. Telepathy has recovered money for reverse domain name hijacking in other cases, too.

Telepathy finds itself on the receiving end of lots of frivolous UDRPs because of its high-quality portfolio of valuable domain names (including many three-letter .coms). Lawsuits filed against perpetrators should make companies think twice before filing a UDRP against Telepathy.

Telepathy Inc., a domain name investment company led by Nat Cohen, has filed a federal lawsuit (pdf) against Corporacion Empresarial Altra S.L. after the latter was found to have engaged in reverse domain name hijacking (RDNH) against Telepathy’s AirZone.com.

The suit asks for a number of findings against the Spanish HVAC company, including a finding of reverse domain name hijacking. It is asking for more than $100,000.

This is a smart move by Telepathy. The company faces a lot of frivolous UDRP complaints every year, and they cost a lot of money to defend. Telepathy has recovered money from some of these cases by filing lawsuits. It should also dissuade future UDRPs against Telepathy’s domains.

A Notice of Dismissal (pdf) filed with the court today shows that Telepathy has dismissed the case without prejudice. Cohen told Domain Name Wire he is “pleased to have reached an amicable resolution to the litigation.”

Although terms of the agreement were not disclosed, Telepathy reached a $50,000 settlement with SDT International in a similar case in 2015.

In addition to seeking a finding of reverse domain name hijacking and a $100,000 penalty for it, Telepathy is seeking declaratory judgment and findings of fraud and negligent misrepresentation. END_OF_DOCUMENT_TOKEN_TO_BE_REPLACED