Debevoise & Plimpton, an international law firm with over $1 billion in annual revenue, has filed an in rem lawsuit (pdf) against two domains it says were used for nefarious purposes.

The firm filed the lawsuit against debevoise-law .com and debevoise-laws .com. According to the law firm, the first domain was used to impersonate one of its employees and request information from a client. The domain forwards to its main website. The second domain leads to a pay-per-click landing page.

This type of spoofing email is commonly used to trick law firm clients into wiring money or disclosing personal information.

Debevoise filed the in rem lawsuit against the domain names in U.S. District Court in the Eastern District of Virginia. This is where .com registry Verisign is located, and the court there often request that Verisign suspend domain names.

The lawsuit claims the domain names are committing trademark cyberpiracy.

Once in a while a UDRP dispute is almost more interesting because of who, instead of what, is involved.  The decision in Help-Aetna(.)com is one of those cases.

On its face, you would think this is one of the bread and butter UDRP disputes which make up most of the caseload.  Aetna, the Complainant, is a well-known US insurance company, and they are represented in this case by Attorney Doug Isenberg, the author of the highly-regarded GigaLaw blog on internet law issues. Additionally, over the last year, Mr. Isenberg has published a series of “Masterclass” YouTube videos focusing on the UDRP in particular.  So, unless someone is sending aid to volcano-threatened Sicilians, it would be difficult to believe this case would result in anything other than a transfer.

The panel is highly distinguished as well.  The three panelists are Mr. Christopher Gibson, the author of more than 200 UDRP decisions. He is joined by Mr. Brian Winterfeldt, a leading intellectual property attorney and president of the ICANN Intellectual Property Constituency among other distinguished positions; and by Mr. Martin Schwimmer, the lanky, erudite Harvard-educated author of The Trademark Blog.

It turns out that the domain registrant is a NASDAQ-listed IT security company which “employs a library of content for use by its corporate customers in simulated phishing attacks”.  Among the assets it uses, apparently, are decoy domain names appropriate to the industry sector of the corporation which has engaged the Respondent as a client.

So, at bottom, the domain name is not used for any purpose to capitalize or exploit Aetna’s mark, or divert their customers.  The fact that the Respondent uses the domain name in connection with a commercial service in some way is not relevant to the fact that no one is running around calling this an Aetna brand service.  In fact, because the name is owned by a security company and used in their specifically targeted tests, it is not as if these phishing emails are out in the wild doing harm of any kind.

But, knowing these facts after seeing the UDRP Response, the Complainant pressed on with a supplemental filing.  There has, in fact, been one case on this same fact pattern –  Facebook v. Wombat Security Technologies, WIPO Case D2020-3218 – in which several domain names such as facbook-login(.)com etc., were used for a similar purpose by a company now known as the “Security Awareness Training” arm of Proofpoint Inc..  In the Wombat case, Facebook was represented by Hogan Lovells, and the Respondent was represented by UDRP heavy-hitter firm Pattishall, McAuliffe, so there was no lack of solid argument on either side.  The solo panelist, Mr. Robert Badgely, redefined “bad faith” to include “good faith” through the magic of legal alchemy, finding, “[T]he concept of “bad faith” within the UDRP does not necessarily carry with it malice or ill motives” despite the fact that it is nearly universally considered to be the “intent” or “mens rea” element of the UDRP.

There has been some additional history to the Wombat case, however. WIPO does not, in general, indicate UDRP disputes which have died and gone to heaven in a court somewhere.  To be fair, there is no feedback loop by which WIPO would know that.  By the same token, WIPO is selective about which cases will receive a mention on a page of “selected” UDRP-relevant court decisions.  That said, it is always the job of counsel to know what they are doing.  As it turns out, WIPO D2020-3218 was further litigated as Proofpoint Incorporated v. Facebook Incorporated, Case No. 2:21-cv-00226 in the US District Court for the District of Arizona (the location of GoDaddy), and was terminated just last week by voluntary dismissal, since it appears that the parties came to their senses upon the realization that a decoy name used for legitimate security testing does not infringe anyone’s mark any more so than training store employees how to spot shoplifters stealing luxury goods.

Unlike single-member panel UDRP proceedings, a three-member panel proceeding requires what is usually a collection of thoughtful experts to actually confer on the outcome.  Simply put, it is more likely that members of a three-member panel are going to find unchallenged assumptions or unsupported conclusions in their own initial positions as a consequence of conferring among one another.

Oddly, it does not appear that the Complainant, Respondent or Panel were even aware of the Wombat case, despite the fact that it had attracted some attention and a few raised eyebrows when it came out last year.  The Panel notes that the “case presents an interesting question” but there is no apparent awareness that the identical question had been raised before, and even taken to litigation.  This may be a function of the lack of adequate indexing of UDRP decisions generally, along with the fact that very few IP practitioners keep track of UDRP minutiae since, if IP disputes were Olympic sports, the UDRP would be a mud wrestling contest in a seedy bar on the other side of town.  Drop by and buy me a drink sometime.

In any event, this Panel took the appropriate view under the narrow criteria of the UDRP, which is intended for clear-cut cases of abuse, finding:

“As to Complainant’s assertions of confusion arising from Respondent’s use of the Domain Name, to continue Complainant’s analogy – were a security company to simulate a bank robbery to promote its services, it might show poor judgment, and it might cause harm leading to some sort of liability, but if it simply never robbed the bank, it didn’t commit the sort of wrong covered by a bank robbery statute.”

So, yet again, we have two fairly identical UDRP fact patterns and two diametrically opposed results with no cross reference.  Since, aside from the working memory of UDRP-obsessives, there are few good indices of UDRP decisions, none of the Complainant’s counsel, Respondent’s counsel, nor any of the three panelists, appear to have been aware that the identical question had been asked and answered a year ago.  One would assume with confidence that Wombat would have been cited, to be directly contradicted.  But, due to the dynamics of three-member UDRP panels, and the narrow class of clearly abusive domain registration for which the UDRP was intended, the result may well have been the same even if on-point precedent had been considered – at least for the purpose of expressly rejecting it.

New group wants to get a handle on DNS abuse such as phishing and malware distribution.

My guest this week is Graeme Bunton, Director of the new DNS Abuse Institute. We discuss types of DNS abuse and how the institute plans to help the domain name ecosystem combat abuse.

Tip of the week: Bulk auth codes at NameBright

A lot of employees apparently fell for it. 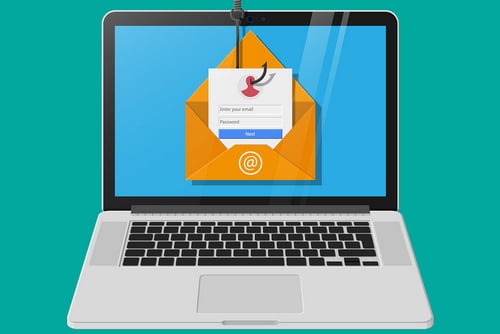 GoDaddy has been taking a lot of heat for a phishing test email it sent to many of its employees right before the holidays.

The email told recipients that they were receiving a $650 holiday bonus and asked them to click a link in order to receive the bonus.

The bonus wasn’t real. It was a test to see if employees would fall for a phishing attack.

I understand why some employees are upset about the test. But I’m more concerned that 500 people reportedly failed the test.

I’m not sure what “failing” means here. Does that just mean they clicked the link? Or did they divulge passwords?

Regardless, that’s a lot of people failing a test in a company of about 7,000. (That assumes everyone received the test email, too.)

I suspect fewer people would have been duped if they were in an office setting rather than working from home. Word would have quickly spread around the call centers, “don’t click that link!”

But it’s clear that GoDaddy needs to continue to educate and test its employees. It holds the keys to valuable assets and people are trying to steal them or trick GoDaddy employees into making critical changes.

Employee’s being mad about “tone-deaf” phishing tests by a company, and the media’s hunger to amplify that message, highlights the uphill battle CISO’s and security teams are faced with. Bad actors don’t care about your feelings.

Hurt feelings aside, I hope GoDaddy continues to run these tests until it’s unable to dupe any of its employees.

Company proposes a way to determine if a domain name might trick web users.

Could this domain trick someone?

I often come across domain name-related patent applications filed by internet security companies. But it was interesting to see financial services company Morgan Stanley file one.

The patent covers a method of analyzing if a domain name might trick a user, thus making the domains phishing candidates.

Consider a name that swaps in ‘cl’ for ‘d’. Optically, these are very similar. But a scanning tool based only on closeness of letters might overlook it. The same goes for internationalized domain names (IDNs).

Morgan Stanley proposes changing the text of a domain name into images with various fonts and distortions, and then using OCR to convert that image back into text. Then a system can analyze similarity to target URLs.